2014 Framingham Concerts on the Green Schedule 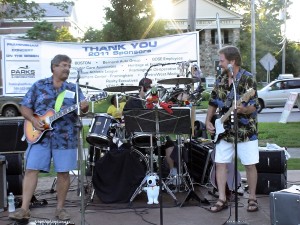 The night's show was the last one organized by Jim Egan, END_OF_DOCUMENT_TOKEN_TO_BE_REPLACED

Off The Hook at Concert On The Green

Off The Hook,  a Framingham, MA based "soulful funky rock band ", living up to the description playing its rendition or "Spooky" at Concert on the Green, August 5, 2011.

The Framingham based band mixed it up playing tunes that ranged from the Grateful Dead's "Dancing In The Street" to Carrie Underwood's "Before He Cheats", an original instrumental written by lead guitarist Ed Alderman, and tunes like END_OF_DOCUMENT_TOKEN_TO_BE_REPLACED 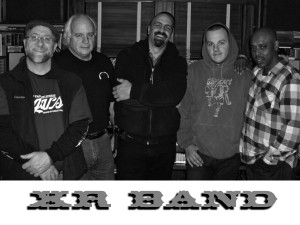 FRAMINGHAM, MA - Due to impending thunderstorms, tonight's "Concerts on the Green", (Friday, July 29th, 2011), which was to have featured "XR Band" has been canceled.

"Concerts on the Green" is a free summer concert series hosted by the Town of Framingham each Friday night throughout the months of June, July and August on the Framingham Centre Common, (off Edgell Rd, near the Rt. 9 / State College exit). Up to date info can always be found at the ncert Info Line at (508) 532-5488.

Be sure to catch the "XR Band" at other venues inlcuding upcoming shows at O'Connell's Pub in Framingham, the KasBar in Worcester and other fine establishments! END_OF_DOCUMENT_TOKEN_TO_BE_REPLACED

FRAMINGHAM, MA - The Infractions packed the house in a July 1st, 2011 performance at the Framingham "Concerts on the Green".

Due to rain last week, this was the first night a band played this year in the free summer concert series that's been running on the Framingham Centre Common every year since 1996.

The Infractions "Play That Funky Music"

This was also the first time a new stage, built by students from Keefe Tech was used.

Aside from the music, the crowd was also treated to END_OF_DOCUMENT_TOKEN_TO_BE_REPLACED