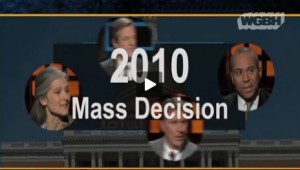 BOSTON, MA - Between June 1st and July 7th Emily Rooney sat and talked with the four candidates running in the 2010 Massachusetts Gubernatorial Race.

Rooney who hosts the PBS nightly news program Greater Boston is a seasoned reporter, editor and on-air personality with decades of experience in Massachusetts politics.

Video clips of each segment appear below in the order they aired.

This round of interviews appear somewhat informal -- a "talk show" atmosphere, with not very hard questions -- something that will likely change as the political season heats up heading towards November.

Democratic Governor Duval Patrick lead off the series and was given approximately 16 minutes of air time on June 1st.  Next was Republican hopeful Charlie Baker who got almost 13 minutes, followed by Independent Tim Cahill with 11 minutes, and last night, (July 7th, 2010), Green Party candidate Jill Stein finished out the series with 9.5 minutes of air time.

These clips are provided directly from WGBH.

Comments Off on MA Gov Candidates on Emily Rooney Show