FRAMINGHAM, MA - Most people who have lived in Framingham for more than 30 or 40 years refer to the ice cream production facility on Old Connecticut Path, (across from the top of Speen Street), simply as "Sealtest" -- even though it hasn't produced Sealtest ice-cream for many years.

In-fact, no ice-cream at all has been made at the Framingham plant since April 31, 2011. That's when Unilever, the multi-national consumer product manufacturing conglomerate which owns the Sealtest, Breyer's and Good Humor ice-cream brands finally shut down the factory.

It wasn't a sudden closing, for a couple years Unilever had been warning the last 200 or so employees they would be shifting production to other facilities where utilities, taxes and wages would cost the company less.

After hearing the final days for the plant were numbered, in March (2011), Michael Montville who grew up in Bellingham, (and now lives in Danielson CT), made a special trip to Framingham.

Mike, who now works for EMC and is also an aspiring amateur photographer, decided to setup his camera and try to capture the perfect shot of the glowing red neon Sealtest sign at night. He hoped to capture the essence of the place -- he was shooting the photo as a gift, a keepsake for his dad. 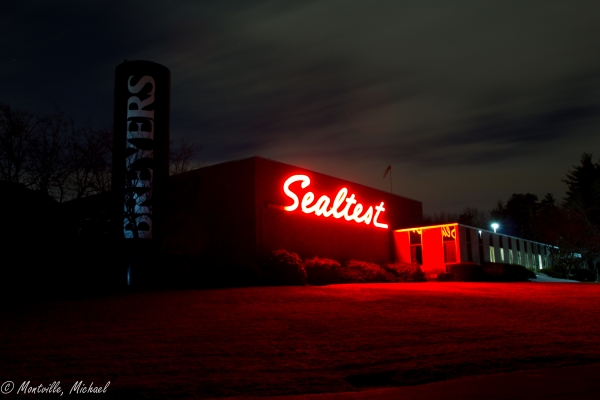 When Mike recently asked his Dad who is now retired if there was anything he missed about Sealtest he said, "The people I worked with.  The people are what made that place."

To purchase a hi-resolution print or digital copy of the above photo, contact Michael Montville at (860) 230-6628, or by email to: montvm1@gmail.com

Some of Michael's photographic works can be purchased in the Art Gallery Hallway of the Silver Circle Art Studio, Putnam, CT, (now through October 2011).

Many hoped another manufacturer would pick up the property and begin making ice-cream again -- or that Unilever would reopen and rehire some of the laid off workers.  But it appears now that won't happen -- not now, and most likely, not ever.

Last Friday, EquipNet Inc., a surplus asset management company based in Canton, MA announced it has partnered with Unilever to sell off the entire contents of the factory including all of the equipment used for ice cream manufacturing and packaging.

In all, there's enough equipment to run a factory capable of producing up to one million gallons of ice cream a day.

There probably isn't a local buyer for "the works" -- but manufacturers, packaging operations and other businesses may be interested in some of the items up for sale.

There are all types of processing and packaging equipment, freezers, tanks, pumps, valves, palletizing and packaging lines, water purification systems, as well as warehouse, utility, and office equipment which could be used in a number of other industries.

EquipNet has one item listed for sale as "an antique" --  it's the neon Sealtest sign.