Off The Hook at Concert On The Green

Off The Hook,  a Framingham, MA based "soulful funky rock band ", living up to the description playing its rendition or "Spooky" at Concert on the Green, August 5, 2011.

The Framingham based band mixed it up playing tunes that ranged from the Grateful Dead's "Dancing In The Street" to Carrie Underwood's "Before He Cheats", an original instrumental written by lead guitarist Ed Alderman, and tunes like Donna Summer's "Bad Girls" -- during which local barber Tony Maenzo, the band's leader and rhythm guitarist was more like one of the "Village People", donning a police hat and whistle to add a true 80's disco feel to the tune. 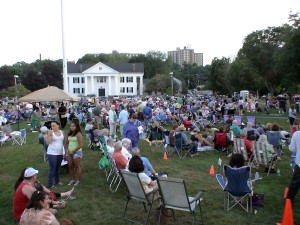 Concert crowd on Framingham Village Green. In the background are the The Village Hall and dormitory towers of Framingham State University.

Throughout the summer, each Friday night locals head down to the Framingham Centre Common, (which is also known as the "Village Green"), for the popular "Concerts on the Green" series that have been taking place for the past 15 years since former Town of Framingham Building Services Director Jim Egan came up with the idea. Egan, retired this month, (August 2011), after 30 years of service to the Town. The concerts have become one of the most anticipated community events, and "the powers that be" have assured us the tradition Jim started will continue. The concerts are now managed by the Framingham Park & Recreation Department. 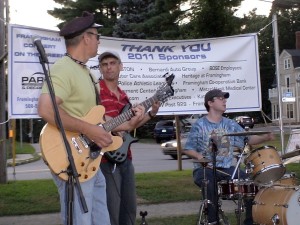 Toot toot hey beep beep! -- The Village People have nothing on Tony Maenzo who sports a Police hat and whistle for a few of OFF THE HOOK's disco numbers.

Along with the featured band, vendors, community organizations and concert sponsors setup tables and booths along the green's perimeter: Wendy Rezendes and Rich Zupan were promoting Jewish Family Workshop IV,  Ken Ross was there recruiting new members for Cub Scout Pack 78, Barbara Sherman was there with her "Pucker Powder", members of The Framingham Democratic Town Committee were promoting, well... "Democrats", members of the Plymouth Church were there with the perennial favorite "Concert Cookies", Kevin McGovern and Bill Robinson were manning the The Framingham Artist Guild tent, and on the opposite side of the field,  Mark Curtis and crew ran the Eagle's All American Grill concession stand.

(NOTE: Click on any image below to enlarge photos and view all as a slideshow!) 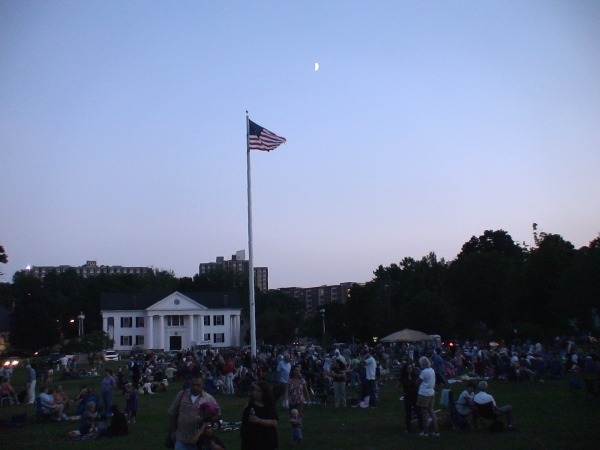 Dusk settles over the Village Green as the OFF THE HOOK band finishes its last set.

The Off The Hook Band is available for private parties, corporate affairs and social events.  For more information about booking the band, contact band leader, Tony Maenzo at (508) 265-7539, or by sending email to: tmaenzo@gmail.com