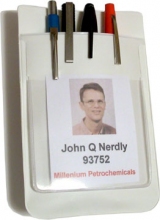 If Framingham is truly the #3 Geek-dom in the USA, there should be a good market for these! Order all you need online at: www.pocketprotectors.com

FRAMINGHAM, MA - Forbes.com has published an article titled, "Geekville, USA: America's 20 Geekiest Cities", and people all over town are patting themselves on the back for our new claim to fame as the #3 "Geekiest City" (town) in the USA.

I've known Gary since high school -- he's a geek. (But come on Gary, did you really mention "Prime Computer" and "General Motors" -- they both shuttered their operations in Framingham 20 years ago -- you need to get out more often).

Brian, I don't know -- but his job title makes it sound like he knows some geeky stuff.

Alison, was unsurprisingly surprised at Framingham's new found geek status. She can't be blamed though, she's very busy requesting and trying to spend grant money as fast as she can, attending meetings so she can tell small business owners what she can't do for them, recycling consultant's reports and studies, hiring more consultants for even more studies -- and getting quoted in the newspaper. But, picking apart Alison's work is fodder for another article, my task here is to find out whether or not Framingham deserves the U.S. Bronze Medal in the Geek Olympics.

As I started to do my research I quickly realized Forbes didn't actually do a survey, they didn't take a poll or even visit Framingham.

What Forbes did was create 20 pages of fluff based on pre-economic meltdown government generated jobs data and blended it with big glossy Associated Press photos. For those who don't understand online publishing -- they wanted to spread the info over 20+ pages so they'd have more space for the advertising sales department to fill. (The sad future of corporate journalism is fodder for yet another article).

The entire Forbes article is based on a 2010 report by the The U.S. National Science Foundation, (or simply "NSF" as it's called by real geeks).

That NSF report is titled "Science and Engineering Indicators: 2010".

Unfortunately, that's not the real source of Framingham's claim to #3 Geek City status either.

The NSF report is based on compiled data it cites as "Occupational Employment Statistics Survey (2007)", which it attributes to the U.S. Bureau of Labor Statistics, (the "BLS" ).

The Framingham portion of the data is compiled from the BLS's (2007) "Metropolitan and Nonmetropolitan Area Occupational Employment and Wage Estimates" (for the Framingham, MA NECTA Division).

And, since those BLS findings are published each year in May for the preceding year, Framingham's current "geek city" ranking is really based on 2006 statistics.

Now, to deduce if 16% of us Framinghamites are really geeks -- the question is: "Of the total number of people employed in Science and Engineering related jobs, in 2006, in Framingham, versus all other jobs in town, how many of those workers were Framingham residents?"

After sliding a few beads around the ol' abacus, you'll likely find it's corporate citizens employing out-of-town geeks -- not 'hamsters, (residents of Framingham), as most of us are hayseeds.

But --- the real reason the ranking is skewed is it's based on "percent of workforce" not "number of jobs" -- that means if some backwater berg had only (3) jobs available, and (1) person worked in a science or engineering related job, they'd get a "33.33%" geek ranking on Forbes scale, and more than double the 16.6% metric that put Framingham in 3rd place.

I'm from Framingham, and I guess I have to be a geek to dig through a local newspaper website, a national magazine website, the NSF and the BLS websites -- and all just to write this asinine article.

Anybody else wanna stand up and be counted?

"Retail salespersons and cashiers were the occupations with the highest employment in 2010, the U.S. Bureau of Labor Statistics reported today. These two occupations combined made up nearly 6 percent of total U.S. employment, with employment levels of 4.2 and 3.4 million, respectively."

Comments Off on Forbes Framingham Geek Data Skewed and Outdated