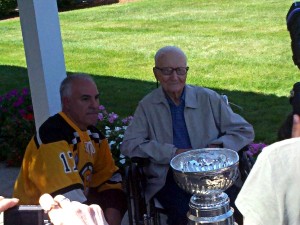 Charlie is a total sports guy -- a Board Member of the New England Sports Network, (NESN), and a Board Member and Past President & CEO of Total Media Group, but Charlie's favorite job is being the Founder and Chairman of the Boston Bruins Foundation, the charitable community involvement arm of his family's business -- you see, Charlie's dad is Jeremy Jacobs, Chairman & CEO of Delaware North Corporation and owner of the Boston Bruins.

When Charlie heard about Desire "Dave" Caissie, a 104 year old resident at St. Patrick's Manor in Framingham, he snuck in a little side-trip to St. Pat's on Friday, September 2, 2011... and brought the Stanley Cup with him! 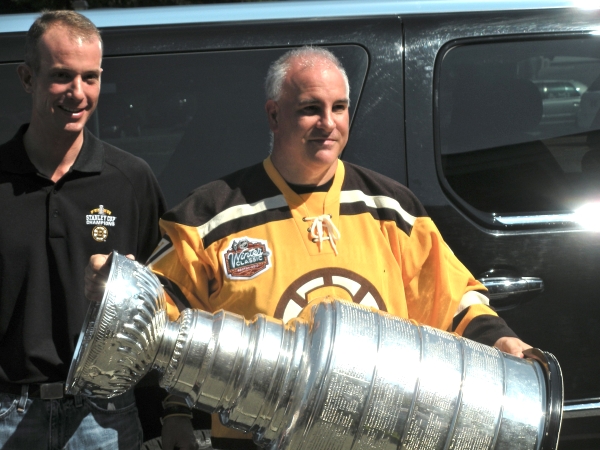 It seems Desire "Dave" Caissie is a bit more of a Bruin's fan than most.

In 1923 Desire Caissie left Canada and came to the United States to take a labor job. The next year, Charles Stanley Adams invested $15,000 for the license to enter the first American hockey team into the National Hockey League -- that NHL team, founded on November 1, 1924 was the Bruins.

Although the team is known as the "Boston Bruins", it's actually the home team of the entire New England 6-state region -- Maine, New Hampshire, Vermont, Rhode Island, Connecticut and Massachusetts.

Dave Caissie, already a hockey fan, was there, listening to radio announcers and reading newspaper accounts of the Bruins' first games. In the 1930's Caissie went in the restaurant business, and his love of the Bruins continued. In the 1940's Caissie took a job at Raytheon assembling military equipment the company produced throughout WWII -- Dave stayed at Raytheon until retiring in 1969. 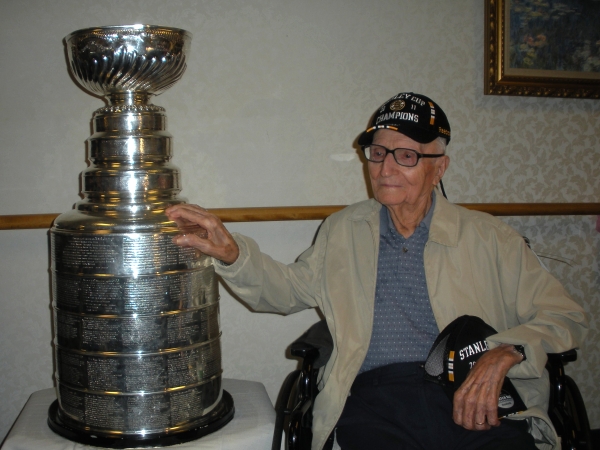 Dave's love of the Bruins continues to this day -- which very likely earns him the title of  "Oldest Living, Longest Continuous Bruins Fan" -- and perhaps the Most Devoted Bruins Fan the team ever had.

When the Bruins signed Bobby Orr in 1966, maybe it was the fact that both Caissie and Orr were from Canada, and now both part of the Bruins -- or maybe Dave saw there was something special about Orr -- but from then on, Caissie began keeping box scores of every Bruins game -- his own personal record of the stats for every game's goals, penalties, wins and losses -- a personal hobby he kept up for nearly 40 years. 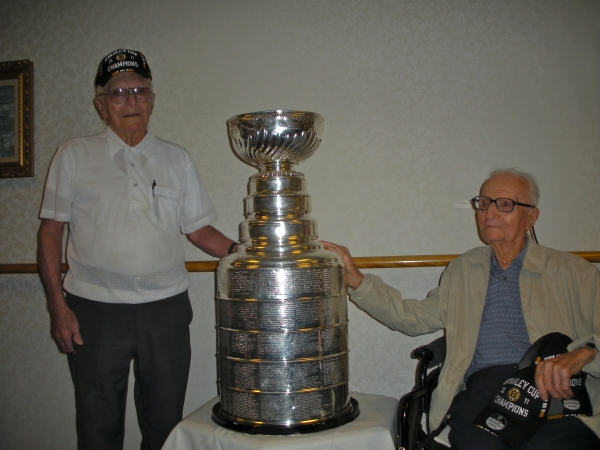 Desire ''Dave'' Caissie, age 104, (right) shares his moment with the Stanley Cup at St. Patrick's Manor with his brother Max, (at left). Max is just a kid at only 92 years old!

While hockey has been an important part of Desire "Dave" Caissie's life -- family is even more important.  He's the father of 5, grandfather of 18 "kids" and the great-grandfather of 24!

Bruce Caissie, one of Desire's grandsons is also a bit of a hockey nut -- but maybe because it's in his blood -- he's got Desire on one side of his gene pool, and former Bruins Capt. Ray Bourque a "4th cousin once removed" on the other side of his branch of the family tree.

Bruce grew up listening to Pépère, (an affectionate nickname some French-Canadian's call their grandfathers -- Mémère for grandmother), and his stories of the Bruins.

Like most New England boys, Bruce grew up playing pond hockey -- cheering for the Bruins on t.v., and getting to every game he could at The Garden.

Bruce's dream for doing something for his grandfather paid off, but this has been a bittersweet year for Dave, Bruce -- and the entire Caissie family. On August 2nd, 2011 at 2:20pm, Bruce lost his sister Paula to Leukemia. The date and time are significant.

A month "to the minute" later, on September 2nd, 2011 at 2:20pm, he was handed the Stanley Cup by Charlie Jacobs so he could carry it in to Desire "Dave" -- his (and Paula's) grandfather.

As his way of including Paula in the special day, Bruce placed one of Paula's Memory Bracelets  in the Stanley Cup's bowl during the visit, (the bracelet is similar to the "Live Strong" bracelets made popular by Lance Armstrong's battle with cancer).

Desire "Dave" Caissie is originally from Waltham, MA, but has been living in Framingham at St. Patricks for the past 6 years. He moved in to be with his wife who was already residing there -- but after having only two more month together, in January of 2006 she passed away -- just two days shy of her 100th birthday. 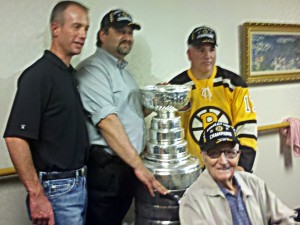 The Caissie's have other ties to Framingham. Bruce tells me he had relatives who lived in town who worked at Dennison Manufacturing for many years.  Bruce himself works for Waters Manufacturing, and started with the company when they were located on Framingham's Newberry Street, (opposite BJ's Warehouse). The company has long since outgrown that facility and are now located in Milford, MA.

When I spoke with Bruce Caissie, aside from going on about how thrilled his grandfather was to actually get to touch the Stanley Cup, Bruce could not stop complimenting how gracious the Bruins organization, Wendy Watkins from the Delaware North Corporation, and Charlie Jacobs were.

Jacobs only gets to take the cup out into the community for limited amounts of time, and when he first wanted to come out to Framingham earlier in the week, Caissie had to tell him he didn't think it would fit in with his or the staff at St. Patrick's schedule -- so Charlie rearranged his schedule on Friday to make the trip at a time that was convenient for Bruce, Dave and other members of their family.

Bruce also mentioned that Charlie had told him "no media" -- he didn't want any fanfare -- he just wanted to come out and make an old-timer happy.

Aside from the actual Stanley Cup, Jacobs also presented Desire "Dave" with a smaller version of the cup -- one of the exact same ones each player gets as their own personal trophy, along with official NHL Championship hats, jerseys and other memorabilia. After visiting with the Caissie's, Jacobs spent a bit more time at St. Patrick's handing out memorabilia and talking with other residents before he left.

(Thanks to Ann & Trevor Hunt for the tip-off about this story and the photos they sent. And thanks to Bruce Caissie for getting the Stanley Cup to Framingham - and a special thanks to Charlie Jacobs for all of his charitable and community outreach work).