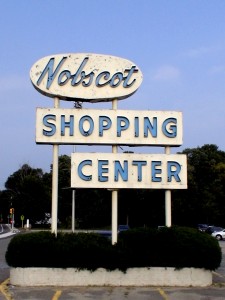 FRAMINGHAM, MA - On July 29th, 2011 we ran an article, "Annie's Book Stop in Nobscot Calls it Quits" about one of the Nobscot Shopping Center tenants and mentioned the Town's growing dismay with Centercorp Retail Properties, Inc, the owner of the shopping center.

Following our article, on September 4th, 2011, Megan McKee, the local correspondent for the Boston Globe ran and article, "Officials set focus on mall vacancies", which quotes Framingham Selectman Dennis Giombetti as saying "They [Centercorp] have done nothing but thumb their noses at us for a very, very long time," and mentions the possibility that Framingham could seek to take the shopping center, (and other similarly distressed properties), by eminent domain -- but that it would only be as a "last resort".

On Friday September 9th, 2011, after finding Centercorp had destroyed the landmark sign in front of the Nobscot Shopping Center, we posted an article, "Nobscot Landmark Disappears", with photos showing the sign as it was on September 3rd, and the empty base that remained on September 9th.

After we ran that story, Danielle Ameden of the Metrowest Daily News interviewed Terri Desjardins, Property Manager for the shopping center, then posted another article,  "Framingham's Nobscot Shopping Center sign taken down".

In it Amaden quotes Desjardins as saying that Centercorp claimed the sign was "irreparable" and that "The neighbors of Nobscot wanted it down, requested it to go down," and that Desjardins went on to say, "[we] wouldn't repair or paint it, we decided to remove it."

So far my calls to Centercorp's principals have remained unanswered, so I decided to make one more attempt to contact them before running this article.

At 4:00p.m. today, I spoke with Terri Desjardin who said she's the Property Manager for all Centercorp properties.

Before I could say much more than my name, and that I was calling from framingham.com -- Terri began telling me she had read the article I wrote about the sign being taken down, and that she had also read Danielle Amaden's MWDN article -- and claimed that she was misquoted -- although she didn't say how.

Terri said she's very upset and feels she's being singled out -- and that Framingham residents have been calling Centercorp and being "unpleasant" towards her.

I pointed out to Terri that I had originally called and asked to speak with Mark Klaman as he's listed as a Centercorp principal and the leasing agent.

I told Terri I was writing this article, and that I had read some forty or so messages from the "framcom" email list in the past several days, as well as the comments in the Metrowest News, and that I wanted to get "Centercorp's side of the story".

I told her I genuinely hoped she could tell  me something good -- something I could write that would give Nobscot neighbors some glimmer of hope that the retail hub of their neighborhood wasn't just a corporate tax shelter -- that Centercorp cared, and wanted to be a good neighbor.

Terri said, "all I will say is there will be an announcement about the shopping center on October 1st".  I told her that leaving an entire town hanging on that comment would not help, and may fuel more of the negative reactions which she feels are being directed at her.

I did persist a bit more -- asking if a new sign was going to be installed, or if she could name anyone specifically who asked to have the sign demolished.

Terri said she saw Herb Chasan, (a Framingham Town Meeting Member for Precinct 4), on television, and that in the interview Chasan had called the sign "an eyesore".  I called Herb and asked him if he asked to have the sign removed. He said that he had been interviewd by Paul Burton on t.v., and he did say the sign was an eyesore -- but had commented it needed to be "fixed up and painted" -- not torn down and destroyed.

I then spoke with Michael Tusinl,a Deputy Commissioner with the Town's Building Department, and asked if Centercorp had taken out a permit to demolish the sign. Tusinl said they had -- that on  August 31st, (2011), they applied for and received a permit. He added that he thought it was odd that Centercorp didn't apply for a permit to put up a new sign at the same time.

Residents, tenants and town officials have repeatedly asked that Centercorp paint the sign, and fix the lights in the parking lot, and repaint the lot lines, and to generally "spruce the place up" in hopes that it would get some new tenants to fill the vacant stores and improve the look of the neighborhood.

Most people I’ve spoken with since Friday feel that destroying the sign was little more than Centercorp being defiant, spiteful and vindictive because Framingham residents and Town officials are questioning Centercorp's operation of the plaza.

Others feel removing the sign was an attempt to make the property harder to locate due to all the bad press Centercorp has been getting about the shopping center. 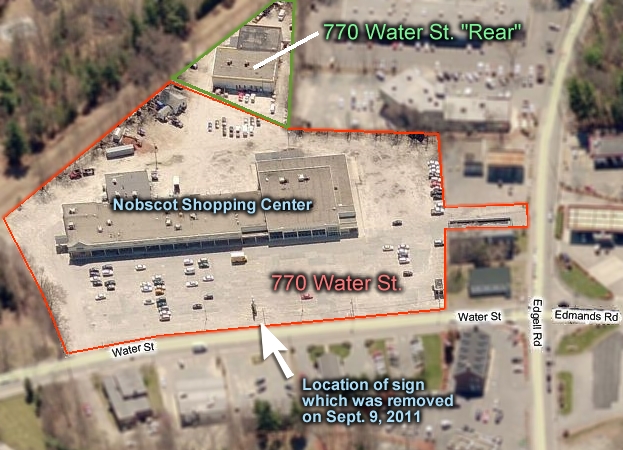 Map of the 770 Water Steet, Framingham, MA properties owned by Centercorp Retail Properties, Inc. and the location of the sign the company destroyed on September 9, 2011.

The 770 Water Street property is actually (2) parcels.  The front one which houses the shopping center is officially listed as "NOBSCOT CENTER LLC", and the 770 Rear Water St. property, (also owned by Centercorp), is listed in town records by the business name "NINETY-NINE WATER STREET, LLC"

Many residents are wondering why a commercial property owner like Centercorp -- actively in the business of developing, leasing and managing retail shopping center properties would refuse to lease space in the Nobscot Shopping Center for so many years, let the property fall into disrepair — and now destroy it's vintage landmark sign.

The company's website, (www.centercorpre.com), lists several other properties, most fully leased -- some advertising to expand and build out "pad sites" on the properties --- but the Nobscot Shopping Center is not even listed.

Residents openly discuss the property, and rumors of "secret lease deals" with rival grocery store chains to keep out competition, to suspicions that the Centercorp has no intention of improving the property and uses it for some type of "business accounting loophole" tax shelter.

When I had spoken with Terri Desjardins, she seemed to be trying to point an accusatory finger at the Town -- and at the tenants that were in the plaza. Her comments ranged from, "to put up a new sign we'll have to go through all kinds of by-law regulations with the Town", and claiming tenants who had closed their businesses "owed Centercorp thousands of dollars in unpaid rent."

I did comment to Terri that the old sign was built like a tank -- made 100% of metal and probably just needed some hammering and welding and a coat of paint -- but she claimed it was "structurally deficient and could not be repaired".  I also commented that maybe if the property was more attractive and had more open stores that maybe the existing small business owners would have been able to keep up with the rent and stay in business.

Again Desjardins tried to rush me off the phone saying, "the photocopy repairman is here, and I don't want to make him wait for me to sign the slip".

I told Terri she really wasn't giving me something good to say about Centercorp, and that I was trying to write a positive article -- something to help calm resident's anxiety over any plans for a new sign, the plight of the shopping center -- and the future of business in the Nobscot neighborhood.

Again, she said I, ("we"), would have to wait until October 1st for "an announcement".