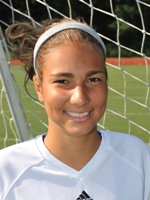 Clark had an opportunity to score first just over two minutes into the game as senior Sara Conway (Lynn, Mass.) sent the ball through to Hannah Moriarty (Millbury, Mass.).  Moriarty scored what appeared to be the game’s first goal, but the goal was waved off on an offsides call. The first of 11 offsides that Clark was called for in the game.

Clark had several other opportunities to take the game’s first lead including a header from Conway that hit the crossbar and bounced in front of the net, but FSU goalkeeper McKenzie Vershon (Chicopee, Mass.) was able to control before it bounced into the net.

With 13:39 remaining in the first half, the Rams were able to break the 0-0 tie.  Freshman Marisa Parent (Revere, Mass.) fired a long shot on net, that Clark goalie Audrey Eisemann (Worcester, Mass.) deflected away, but sophomore Marissa D’Angelo (Whitman, Mass.) was there for the Rams to one time the loose ball into the net for her third goal of the season.

The game would remain 1-0 in favor of the Rams until a pair of second half goals from junior Hana Chamoun (Bala Cynwyd, PA) gave Clark their first lead.  Chamoun’s first goal came in the 52nd minute when she headed a corner by Jenna Zarou (Garden City, NY) into the back of the net.  Her second came with 16 minutes remaining as she fired a shot on net from 30yards out that hit the crossbar and bounced across the goal line.

The lead would stand until the game’s final six minutes when DeSouza scored her three goals.  DeSouza tied the game at 2-2 with 5:24 on the clock as she placed a shot inside the far post off an assist from sophomore Kayla Austin (Winchester, Mass.).  A little over a minute later she added her second when she stole the ball just outside the box from a Clark defender and dribbled at the goal placing a shot in the top corner that gave the Rams the 3-2 lead with 4:18 remaining.

Clark responded and had a chance to tie the game with 2:25 on the clock as Chamoun took a direct kick from just outside the box, but Verschon came up with the big save.

DeSouza added an insurance goal that completed the hat trick with 1:20 remaining as she converted a penalty kick after being taken down in the box.

Vershon finished the game with seven saves and picked up her second win of the season, while Eisemann made six stops for the Cougars.

The FSU Rams Women's Soccer team return to action on Wednesday when they host Rhode Island College at 4 p.m.