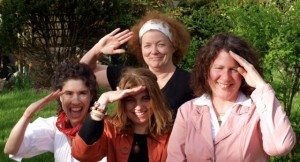 FRAMINGHAM, MA - Cheryl Perreault, Liz Appleby, Dianne Bilyak and Deborah Rocha came together when they met at The Mouth, a forum for women performers, poets and writers created by Liz Appleby.

Discovering they could make each other laugh uproariously, they decided to pool their talents and create a fluid, humorous reflection of the world from their unique points of view.

On Wednesday, November 6th, 2013, the ensemble will be featured at the Amazing Things Comedy Mique Show in a set entitled, "I'll Give You Something to Laugh About",  a product of their collective talents told in poems, stories and songs.  The show starts at 7:30pm.

Cheryl Perreault is a contemplative, funny (with a twist of zen) spoken word artist. With a background in psychology, she works as a facilitator of creative writing and community arts, has two CDs of musically accompanied poetry and hosts Wake Up and Smell the Poetry, a monthly poetry/music venue at Hopkinton based HCAM TV Studios.

Liz Appleby has been called a compassionate and often irreverent improvisational comedic storyteller in her questioning of our human behavior. Liz performs "live comedic blogging" in performance on stage and also wears many other hats including Presentation Skills and ESL Coach and host of The Mouth.

Dianne Bilyak, a heady humorist/ playwright/poet, reads her life stories in a style similar to David Sedaris. Dianne's play is being performed as part of the United Solo Festival,in NYC in October 2013 and has a book of poems titled, Against the Turning.

Deborah Rocha is a witty and highly rhythmic singer/songwriter with an intelligently overactive imagination. She has released two CDs, co-wrote a folk secular oratorio and is currently working on a third CD about the art in science.

Join them and a group of other miquers doing PG14 comedy in stand up, song, story, magic and more scheduled for the show including:

Tickets are available at the door are just $6 and only $5 for Amazing Things members.

Comments Off on Women's Comedy Ensemble Featured at Amazing Things