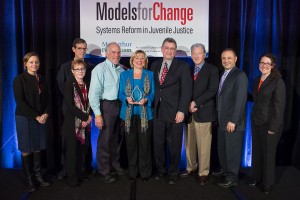 The Models for Change Executive Committee selected Senator Spilka from 16 nominees from across the country in the Champion for Change in State Leadership category. Senator Spilka was nominated for the award by a group of Massachusetts advocates, researchers and organizations representing a wide array of stakeholders in the juvenile justice system. In nominating Senator Spilka, they praised her willingness to take on controversial issues to significantly improve the lives of children and families and her ability to work collaboratively with other elected officials and stakeholders.

"We join together because we think Senator Spilka’s extraordinary leadership on a broad array of progressive juvenile justice reforms in Massachusetts has resulted in demonstrable and meaningful impact on the lives of children and families across the Commonwealth, and because she serves as a model to others on how to build consensus and support for these issues," the nominating organizations and individuals wrote.

"Senator Spilka stands out for both her approach and her effectiveness. In our eyes, she would be a champion just for having the heart, vision and courage to take on these issues and for seeing the societal value of promoting a fairer, more developmentally appropriate, and more effective juvenile justice system. But, in fact, she is astoundingly effective and she has taken us from dreaming about a better juvenile justice system to experiencing massive improvements."

Senator Spilka’s nomination was based on four specific examples of her leadership in progressive juvenile justice reform in Massachusetts over the past several years:

"I am so honored to be recognized by the MacArthur Foundation and the Models for Change coalition," Senator Spilka said. "There’s always more we can do to better serve our children here in Massachusetts, and nationwide, but I hope that these important reforms will make positive differences in the lives of our children, families, friends and communities. I’m grateful for the support of the Models for Change network and my colleagues in the legislature that helped make such critical changes possible."

The Models for Change initiative is a John D. and Catherine T. MacArthur Foundation national effort to reform juvenile justice systems across the country to make them more effective, fair, rational and developmentally appropriate. The annual conference brings together nearly 400 state and local officials, advocates and community organizations to network, share information and learn from leaders in juvenile justice reform efforts. Each year at the conference, the MacArthur Foundation and the Coalition for Juvenile Justice honor Champions for Change, individuals who are responsible for promoting progress in juvenile justice systems and are positively impacting the lives of court-involved youth, their families and communities. These leaders act to create pathways from delinquency and re-offending that increase the potential of young people to succeed in school and in family, peer and community relationships.