Each year the Framingham Historical Society puts together a house and garden tour of historic Framingham homes. Below are just some of the homes included in the tours. 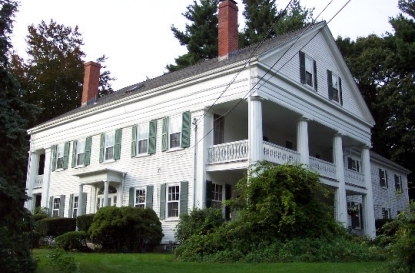 One of Framingham's most striking Greek Revival homes. Built in 1826 by Dexter Esty, the property was a wedding gift from Timothy Walker of Charlestown to his daughter Mary, who married Dr. Simon Whitney, a young Framingham physician just out of medical School. The builder, Dexter Esty, was the father of Alexander Rice Esty, a nationally acclaimed architect from Framingham. Following Dr. Whitney's death, the home was purchased by Artemus Stone and the house remains in this family today. Originally located close to the Edgell Road sidewalk, its Doric-columned temple front faced Edgell Road. In 1916 the home was moved to its present site at 10 Auburn Street, where an east end colonnade and balconies were added and the "front entry" was included as part of a Federal Revival design. 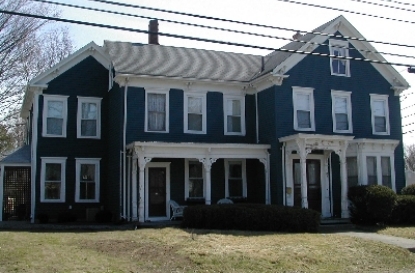 Ever wonder how to expand an antique home so that the new addition looks like it's always been there? Take your lesson from a young family in the mill village of Saxonville they loved the striking yet livable architecture of their 1879 Italianate but they desperately needed more space.

The main house was built by the Haynes family, carpenters and cabinetmakers, on land once believed part of the Jennings Farm. Bought in 1900 for $2500, the home then remained in the Ryan family, passed down through the years from family member to family member for $1 until 1997 when the current owners became only the third family to own the property.

Applying the skills of both a visionary architect and a local contractor experienced in Saxonville historic home renovations, a two-story wing was added in 2004. By remaining sympathetic to the exteriors Italianate massing, replicating interior trim details and choosing authentic colors and decorative fixtures, the owners gained new living space that blends seamlessly with the antique charm of their home.

The result is the welcome addition of an inviting Rumford fireplaced family room, a serene master suite with a vintage-feeling white tiled bath and a second staircase that makes the entire new space seem like a private retreat.

Painted an impressive rich blue shade, it's easy to imagine how the home looked decked in bunting, as was the Ryans custom on patriotic occasions. A photo, circa 1920, of the home so decorated can be found on the dining room wall. 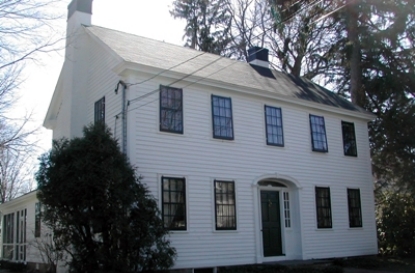 This Colonial Revival gem, known as the Dexter Esty House, is situated in the heart of the Jonathan Maynard Historic District. Built between 1832 and 1850, the house was part of the tremendous spurt of growth when the Boston Worcester Turnpike (now Route 9) was opened in 1806. The home still features a connected barn and stone walls that evoke the area's early agricultural heritage.

Dexter Esty purchased this property in 1837. A carpenter, he built the Village Hall on the Centre Common and the Dr. Simon Whitney House on Auburn Street and perhaps this house as well. A vernacular Federal house of traditional form, it sustained two major remodelings. The front was Victorianized in the late 19th century to include two large bay windows on the first floor on either side of an elaborate front door all in the then fashionable Italianate style. These changes are attributed to Alexander Rice Esty, Dexter's son, who grew up in this house and became a nationally known architect. In 1935 the house was remodeled again, this time in the Colonial Revival style, popularized nationally by Wallace Nutting who lived on Vernon Street. The alterations, designed by Boston architect Samuel Glaser, included the custom-designed Colonial fanlight door, removal of the Italianate exterior trim, and the return of six-over-six windows to match the second floor originals of the Federal period. The blueprints of both the Italianate and the 1935 Colonial Revival remodeling are on display.

You can read the history of the house by the changes in the wood floors. In the hall you'll see the original wide pine, then the oak and maple from the 20th century changes. The walnut banister and robustly turned balustrades of the stairs are the only remaining features of the Italianate remodeling. To your right, the cozy study with built-in bookcases reflects the 19th century proportions of the oldest floor plan. Throughout the home please note the owners considerable collections, including original Audubons, antique Federal furniture from eastern Massachusetts and a spectacular collection of Rose Medallion 19th century Chinese export porcelain, to mention just a few of the fine treasures. Once youve completed the tour of both levels, youre welcome to tour the barn to the rear of the house, which retains the horse stall, feeding rack, and trap door to the hay loft. 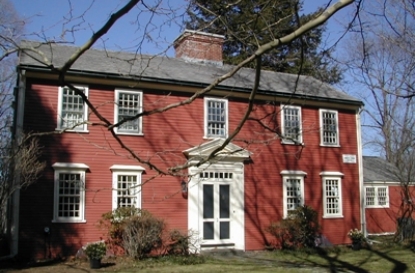 This Georgian architectural treasure started its storied life in the late 18th century as a farmhouse. One move (back from Edmands Road), an inspired restoration, and a recent addition later, it represents an idealized view of what life in a historic house (1770s) in New England should be. It is anchored in a classic New England landscape by a rock outcropping, with sweeping views of the pastoral four acres on which it is sited. Stand in front, next to the carefully nurtured elm tree on top of the knoll, and admire the center chimney that serves four fireplaces, the wide double doors, and welcoming pineapple.

A 1942 restoration showed sensitivity in integrating moden conveniences with a romanticized version of the past with added original old wainscoting and modification of the house into a saltbox. A new addition features an up-to-date kitchen with wide-planked hickory floors, soapstone counters, and hand-planed pine cabinets. Antiques gathered over the years include a butcher block table from the late 1800s, a linen press, dough boxes, and church pew bench. Don't miss the 12-over-12 windows, the bull's-eye glass in the living room dutch door, the original hardware on the doors, including a box lock with a half-foot-long key, and the working beehive oven.

In the living room ask to see the secret room. A floor panel lifts up and you walk down narrow steps to find yourself in a cozy hideaway, complete with a stone fireplace and servant's bell. It is furnished with leather banquettes from a tavern in Worcester and painted paneling, with one of the paintings featuring the Nobscot train station.

On your way to the barn, which may be 100 years older than the house, note the antique corn crib and a carriage house. The barn, which some believe is the oldest continuously operated barn in Framingham, currently houses hens, goats, ducks, two ponies, and a horse.

Note: Framingham Historical Society dates this home to 1782, however the on the home plaque says 1790. 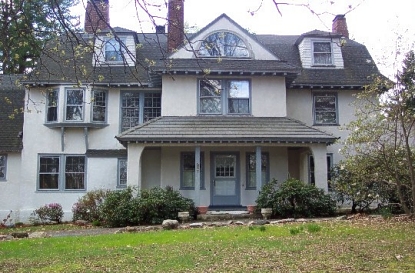 If you're touring this home and counting the fireplaces, put your guide-book in your pocket because you're going to need every finger and thumb! Secluded at the end of a very long driveway you'll discover a home the likes of which are truly rare.

Built in 1903 as a working farm, the home directly across the driveway was the original barn to the property. The Victorian house boasts nearly 6000 square feet of authentic living space throughout three finished levels. Southern fir floors, warm weather porches and balconies, an enormous coffered ceiling parlor set off the grand foyer all hearken back to the life of a gentleman farmer.

History reveals itself in every room watch for the old Bell system in the kitchen, the Pierpoint doorknobs, and the gorgeous Delft fireplace tiles. The sumptuous master suite is complete with balcony, cubby-lined dressing room, and private bath.

The third floor holds a billiards room, custom cedar storage, studio, bedrooms, bath and more - not your average attic! Several renovation projects are in progress throughout the home kudos to this ambitious steward! 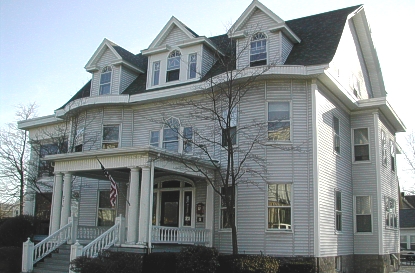 Rarely is a property so synonymous with community involvement. For more than 80 years, this magnificent 5982 square foot Turn-of-the-Century estate has been "home" to some of Framingham's most enthusiastic proponents.

From 1924 through 1955, the house was the residence of Arthur and Mary Fitts. Arthur and his brother George expanded the Fitts Brothers markets from Framingham into Natick, Marlborough, Westborough, Northborough and Hudson. Both brothers were Masons and successful real estate investors who gave generously to their communities. Arthur Fitts was President of the Farmers and Mechanics Savings Bank (now BankNorth) from 1918 until his death in 1953. He also served as Town Treasurer and chairman of the Ration Board during World War II. Today the Fitts family owns several buildings in downtown Framingham, three of which have just received a major facelift.

For the second half of the 20th Century, the building was owned by Framingham Community Chest, Inc. which merged with United Way of Tri-County, a charitable corporation that provided a multitude of services to the Town.

Patterson and Gerry, CPAs, purchased the property in the year 2000, and embarked upon a major restoration that permits new-age function and technology while preserving the grand architectural style and appointments original to its construction. Since arriving in Framingham, the firm has been an enthusiastic supporter of many of the towns non-profit organizations including the Framingham Historical Society and Museum. Today they welcome us to Tour their entire three levels of carefully renovated space, demonstrating just how successful "adaptive re-use" can be.

As you circle each level, up to the third floor, then descend the back staircase, take special note of the intricate natural woodwork, the fireplaced office suites, coffered ceilings, wainscoting, arched entries, built-in seating and bookcases, and breathtaking walk-out bay windows. 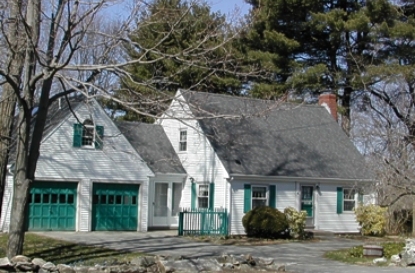 Following World War II, much of the "postwar" housing in Framingham consisted of single-story California ranches and quintessential New England Cape Codders. Amid the thousands of homes built in Framingham that fit these categories, there are the rarer examples where builders modified and customized the popular plans, creating more elaborate versions with added features. Such is the case with this inviting, remodeled Cape Cod on the Sudbury River.

The circular driveway, the exaggerated pitch of the roof and the two car garage are obvious indications that this home was special among its contemporaries. Inside, the present owner demonstrates how modern New England ingenuity can make the most of relatively modest-sized spaces.

The modern white kitchen offers a lovely bay window view, and guests can enjoy the patio and hot tub off the inviting dining room. A cozy, knotty-pine paneled den and elegant front to back living room with a grand fireplace afford comfortable living space.

On the second floor, a unique and expanded master suite makes use of the space over the garage and now includes a private den, a cathedral ceilinged, skylit bedroom with its own deck and custom built-in storage designed by the former owner of Alpen, a women's clothing store which operated in downtown Framingham for many years. 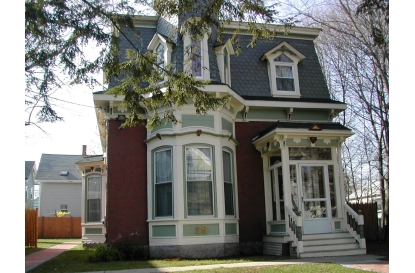 When well-known storyteller Libby Franck first invited us to her home of nearly 40 years, she informed us that "living in a house like this affects who you are." Something like life imitating art, we surmise! This post Civil-War era French Second Empire is a South Framingham treasure just begging your discovery.

Look for hints of cultural history throughout this home the published books authored by the owner's mother, Elisabeth H. Friermood, the 1842 jacquard coverlet made for Jacob Fryermod, the story boards that frame the homeowner's research for her performances. This home is truly an extension of its owner, and vice versa!

For more information about the Annual House Tours, or about the Framingham Historical Society, visit: www.framinghamhistory.org