Boston 3-Day for the Cure Starts at Farm Pond in Framingham, Friday July 22, 2011 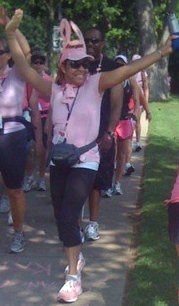 Dr. Sheri Phillips, National Spokesperson for the ''3-Day for the Cure'' organization, shown here during a 2010 walk.

This year (2011) the Boston 3-Day is July 22nd, 23rd and 24th, and the Opening Ceremony and starting point for the Boston walk is again at Farm Pond in Framingham!

I had a chance to speak with Dr. Sheri Phillips, this year's National Spokesperson for the Susan G. Komen 3-Day for the Cure organization.

At the start of the interview, I said "I'll ask some questions, and if any are too personal, or you prefer not to answer, or want me to leave anything out -- let me know."

Sheri, the Homewood, Illinois mother of two teenage daughters, and a practicing physician for the past 18 years who is now a 2-year survivor of breast cancer said, "None of it is too personal.  Information is power. It's important to get as much information as possible out to others and raise awareness not only with those who END_OF_DOCUMENT_TOKEN_TO_BE_REPLACED

FRAMINGHAM, MA -- This Saturday and Sunday, June 14th & 15th, the Framingham Celebration Committee with the support of Framingham Park & Recreation, will be holding the 2008 Flag Day festival at Cushing Memorial Park. Cushing Park is on Dudley Road and was formerly called Tercentennial Park. The festival will include a Civil War encampment and battle re-enactment being called the “Battle of Farm Pond." More than 200 civil war re-enactors are expected to participate in the encampment.

The festival hours are 10am till 4pm on both days and the public can park onsite through the park entrance off Dr. Harvey Cushing Way. There will be a craft show with approximately 50 vendors, live music, festival food and fun for the kids.

This year’s festival entertainment will be kicked-off by a local favorite. Sergeant Dan Clark, formerly of the Massachusetts State Police, is known as “the singing trooper” and will begin the musical line-up that also includes patriotic tunes by the Natick American Legion Band.

The battle scene re-enactment will begin at 1pm on each day. The Battle of Farm Pond name was chosen to
give it a Framingham connection. The scene is expected to be authentic to the smallest detail, including uniforms, muskets and cavalry units.

In addition to the civil war component, classic cars and local jeep clubs will be there to show their vehicles to the public.

The schedule for Sunday includes a 10am camp dress parade of the civil war re-enactors and the second skirmish in the Battle of Farm Pond at 1pm. In addition, there will be the Flag Day patriotic procession and salute to the flag at 2:30pm and the moving Flag retirement ceremony run by the Framingham Veteran’s Council at 4pm.

More information is available at www.geocities.com/flagdayframingham or from the Framingham Park & Recreation office: 508-532-5960.

Comments Off on FRAMINGHAM FLAG DAY FESTIVAL THIS WEEKEND