Stop in to meet the on air personalities and producers who entertain and inform you on the dozens of shows produced at AF-TV: shows like END_OF_DOCUMENT_TOKEN_TO_BE_REPLACED

"We have offered evening workshops for several years, and some folks have requested daytime availability," said Francesca Cerutti-Harris, AF-TV’s Assistant Director for END_OF_DOCUMENT_TOKEN_TO_BE_REPLACED

FPAC-TV rebrands itself as ''Access Framingham'' and will use new logo (above) and new website address: www.accessfram.tv

FRAMINGHAM, MA - At Monday night's Annual Meeting of Framingham Public Access Corporation, FPAC members heard about the successes of the past year and challenges to come for Framingham's Community Media Center. Then the board and staff added a surprise announcement.

Beginning this week, FPAC will operate with a new name and logo, one that FPAC officials believe will reflect the organization's mission to engage, serve, and enrich the community by developing programming by and for the people of Framingham, providing educational opportunities, and facilitating the exchange of information through traditional and new media.

The new name for the five-year-old organization will be "Access Framingham".

Access Framingham will remain committed to the promise of END_OF_DOCUMENT_TOKEN_TO_BE_REPLACED

Comments Off on FPAC-TV Unveils New Name and Logo

Framingham, MA - Sixth and seventh graders from the Fuller Middle School who have participated in an after-school program at Framingham Public Access are among the finalists in Middlesex County District Attorney Gerry Leone's new Cyber-Safety PSA Contest.

The youngsters have been learning television production skills under the watchful eyes of Fuller Middle School teacher Patrick Galligan and FPAC's Francesca Cerutti-Harris. The weekly classes have been part of a partnership between the 21st Century After School Programs, the Framingham END_OF_DOCUMENT_TOKEN_TO_BE_REPLACED 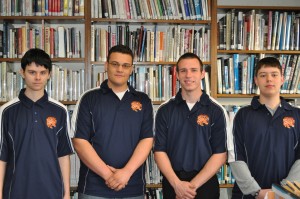 The internship opportunities were coordinated by FPAC Executive Director Bill McColgan, Keefe Tech Superintendent-Director James Lynch, and School Committee member and FPAC Board of Directors member John Kahn. "We sat down and discussed creating a community partnership between our organizations," said McColgan. "We thought that creating these internship opportunities were a great first step."

Daniel Coelho, Hugo DeAlmeida, and Matt Rivers of Framingham and Brad Naugler of Holliston were chosen as student interns by Keefe Administrators based on recommendations from their teachers.