Framingham, MA - At Access Framingham's Annual Meeting on Monday evening, (September 22, 2014), attendees heard about the successes of the past year, including a record number of new local productions spotlighting the community, challenges to come for Framingham public access television station and training center, and a very exciting bit of news. 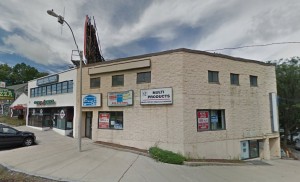 President Bill Rabkin announced that Access Framingham will move to a new location near Framingham Centre Common, thanks to a new agreement with Gordon Real Estate, owners of the property at 4 Vernon Street which will house this new Community Media Center for Framingham.  Design work is now underway for the new studio facility, and construction will take place in the coming weeks.

Since 2006, when Framingham Public Access Corporation was formed, the Town’s public access studio has been housed in “temporary” facilities at the rear of the Fuller Middle School.

Bill McColgan, Executive Director of Access Framingham, says the organization has greatly appreciated the partnership with the Framingham Public Schools over the years. “We look forward to more ways to collaborate in the future, but we did need to find a permanent home where a state-of-the-art studio could be created.  Working with Jim and Peter Gordon, Access Framingham has now found that home.”

Upon completion of the new facility, Access Framingham will END_OF_DOCUMENT_TOKEN_TO_BE_REPLACED

Comments Off on Access Framingham Announces New Studio; Members Elect 3 to Board of Directors

Stop in to meet the on air personalities and producers who entertain and inform you on the dozens of shows produced at AF-TV: shows like END_OF_DOCUMENT_TOKEN_TO_BE_REPLACED

FRAMINGHAM, MA - The updated schedule for Framingham election programming on Comcast channel 9 is as follows:

RCN channel 3 will be showing FIMBY at 2 PM and League of Women Voters at 4 PM daily until the election.

Comments Off on Framingham Election Programming on Channel 9