FRAMINGHAM, MA - On Saturday, October 15th, 2011, kids enrolled in the Framingham Youth Hockey Program lined up outside Loring Arena in Framingham for what may be a once in a lifetime opportunity. 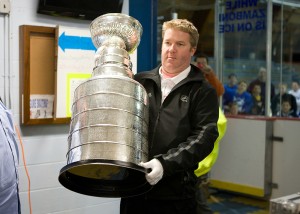 The crowd was waiting for Mike Bolt, a "cup keeper" from the Hockey Hall of Fame in Toronto, Canada to arrive at the local ice rink -- "the cup" that Holt keeps is none other than Lord Stanley's Cup -- the coveted trophy the Boston Bruins brought home after defeating the Vancouver Canucks 4-3 in the 2011 NHL Championship playoffs.

At 6:30pm, under police escort, Bolt arrived with the Stanley Cup protected in its travel case. With white gloves on, Bolt removed the cup and carried it in to the arena.

(NOTE: You can click on any photo on this page to enlarge and view all as a slideshow). 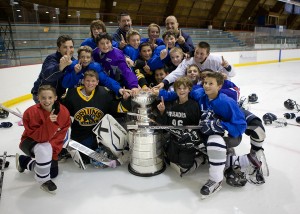 Framingham Youth Hockey Peewee ''A'' Team with Coach Joel Idelson (left), Head Coach Joe MacInnis (center, back), and Coach Charlie Stefanini (right), were lucky enough to be on the ice when the cup arrived at Loring Arena. (Photo courtesy of and Copyright ©2011 Wayne Dion)

Inside Loring Arena, Joel Idelson, (President of Framingham Youth Hockey, and one of the four coaches of the Peewee "A" Team his son plays on), along with Head Coach Joe MacInnis and Coach Charlie Stefanini were on the ice with their team.

Bolt took the cup out onto the ice and the Peewee "A" Team got in on a photo opportunity any young hockey player would trade their shin gaurds for.

Each FYH team has four coaches, and unfortunately for Coach Carl Smith -- he missed being in the shot.

According to Idelson, the night was planned as a special event -- something extra for the kids to remember. All players on a FHYP team roster were invited to come down to Loring and have their pictures taken with the cup -- and hopefully have some of the cup's magic rub off on them. 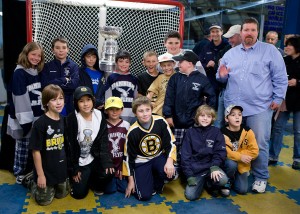 Idelson wanted to thank Coach Scott Penrod, (of the FYHP Squirt "C2" Team), who made the event possible -- he was the one that made contact with Mike Bolt and arranged to get the Stanley Cup to Framingham.

Last month, (on September 2, 2011), we reported that Charlie Jacobs, Founder and Chairman of the Boston Bruins Foundation had brought the cup to St. Patricks Manor to honor Desire "Dave" Caissie, a St. Pats resident who at the age of 104 is likely the Oldest Living, Longest Continuous Boston Bruins Fan.

Another bit of little known Stanley Cup trivia that even hardcore Framingham hockey fans might not know -- the name of one former Framingham Flyer is engraved on the cup!

Peter Taglianetti who played for the Framingham South High Flyers Hockey team, (class of 1981), was a member of, and played in 44 regular season games with the 1991-1992 Stanley Cup Champion Pittsburgh Penguins -- although he couldn't lace up for the playoffs (due to injuries) his name appears on the Stanley Cup.

Along with the FYHP players and their families, several town officials were invited to attend and have their photos taken with the cup. Bob Merusi and his staff from the Framingham Park & Recreation Department, Ray Riva and his crew who operate the Loring Skate Shop & Concession, Town Manager Julian Suso, Selectmen Laurie Lee and Jason Smith, and other town officials and employees came to see the cup and be part of the FYHP special event.

Idelson also commented that unlike other sports organizations that run fundraisers, sell candy, and are continually asking for donations -- Framingham Youth Hockey Program only runs one fundraising event each year -- a golf tournament held in the fall.

This year, the 17th Annual Framingham Youth Hockey Golf Tournament will be held Monday, October 24, 2011 at the Charter Oak Country Club in Hudson. Fee to enter the tournament is $185/person and includes: Golf, Box Lunch, Cart, Dinner after golf is completed, a Silent Auction, Live Auction and Raffle Drawings.  Those not golfing are welcome to attend the dinner and auctions, (cost is $50/person).  Registration Form, Sponsorship Form, and other information can be found on the FYHP website at: www.framinghamyouthhockey.org, or by contacting Leigh McLellan by email at: leighmclellan@comcast.net

Loring Arena is owned by the Town of Framingham and operated by the Framingham Park & Recreation Department. In addition to being the "home ice" of the Framingham Youth Hockey Jr. Flyers, Framingham Public School's Hockey Teams, Framingham State University Hockey, the Bay Path Figure Skating Club, and several other groups, Loring is open many times each week during the winter season for Public Ice Skating.

Loring Arena is located at 165 Fountain Street, Framingham, MA. There is a recorded information line at (508) 532-5950 that can be called for public ice skating times and information, league and game info, cancellations or to speak to someone in the main office.