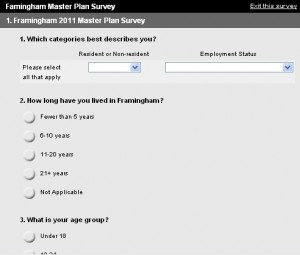 The Framingham Planning Board is running an online "Master Plan Survey".

FRAMINGHAM, MA - The Town of Framingham Planning Board has been working on updating the Town's Master Plan for nearly a year.

The Master Plan is laid out on a map which takes into account local long range planning efforts, (and is influenced by initiatives undertaken by State and regional planners).

After reviewing the Town's Master Plan last summer, the Planning Board hosted a series of public forums;  an  "Open Space, Conservation and Recreation" forum, one regarding Economic Development and others to get input from individual neighborhoods.

In November (2010) a draft of an updated Master Plan was drawn based on that input along with past planning initiatives, current land use, proposed and in-progress capital END_OF_DOCUMENT_TOKEN_TO_BE_REPLACED