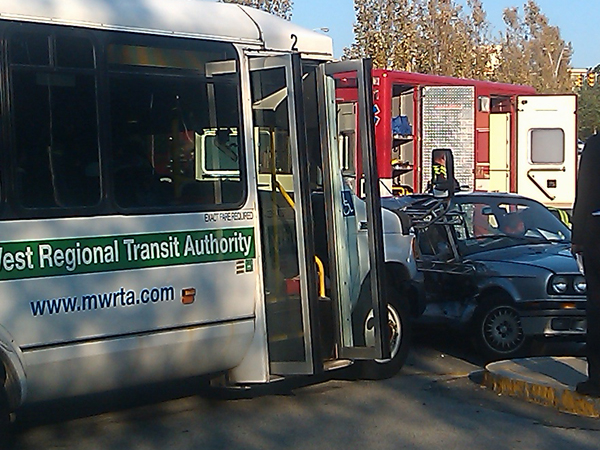 Passenger side of compact car crushed from impact of MWRTA bus.

The bus, (MWRTA #2), which was headed east on Flutie Pass struck the car as it was taking a left turn into Sears rear parking lot seriously injuring the car's driver and also injuring at least three others.

The entire passenger side of the car was crushed in from the impact of the 5-ton MWRTA bus. The bus  appeared to only sustain minor damage -- the large metal bicycle rack mounted to the front of the bus was crushed, torn from its brackets and became tangled into the wreckage of the car. 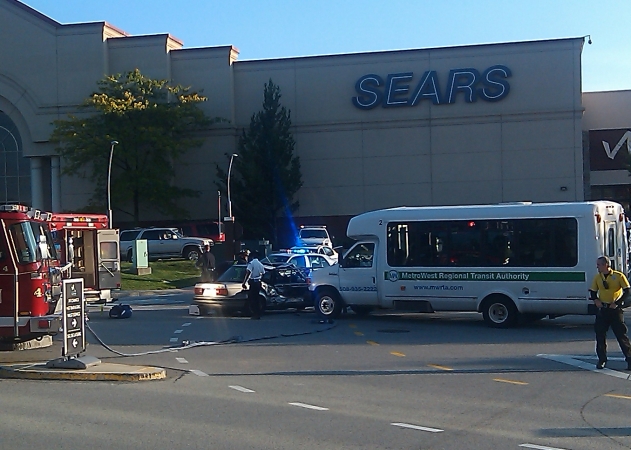 MWTRA bus dwarfs the size of the compact car it collided with behind the Natick Sears store.

Paramedics and Fire Rescue stabilized passengers inside the bus. One passenger was removed via the rear emergency door of the bus approximately 25-30 minutes after the crash occurred, carried out on a back-board and gurney by six fire firefighters. 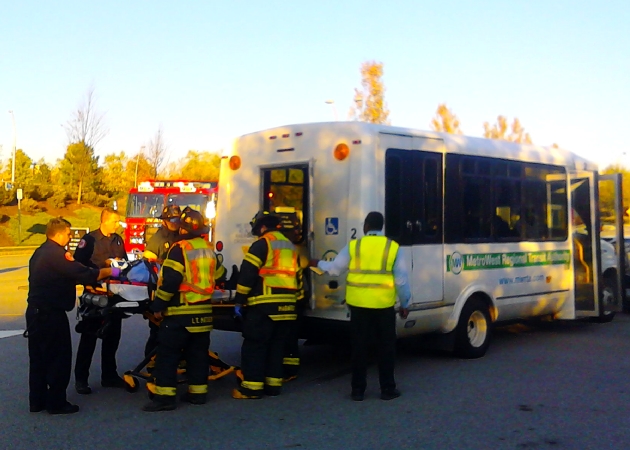 MWRTA bus passenger is carried off bus via rear door by EMTs and Fire Fighters.

Passengers on MWRTA buses are not required to wear seat belts, which may have contributed to their injuries.

No further information on the cause of the accident, the injured parties or bus driver has been made available at the time of this writing.

The MWRTA is a regional bus service which operates as quasi-independent agency funded by State and Federal monies along with local assessments to the towns it serves.  The system charges rider fares which bring in some revenue, but the system operates primarily on government funding. The MWRTA system was formed in 2007 when it took over operation of the Framingham town operated bus service known as "LIFT", (Local Intra-Framingham Transit). The LIFT buses provided transportation to and from Downtown Framingham, Route 9 and service into neighboring towns and connections to The Natick Neighborhood Bus system. In 2009 the Natick system was folded into the MWRTA and all of its bus routes now operate out of the MWRTA Central Hub located at 37 Waverly Street, (Rt. 135), in Downtown Framingham.  The expanded system now offers services into Ashland, Framingham, Holliston, Hopkinton, Marlborough, Natick, Sherborn, Southborough, Sudbury, Wayland and Weston with connections to MBTA and Commuter Rail service in Downtown Framingham, Natick MBTA station and the Newton (Woodland) MBTA station.

Comments Off on MWRTA Bus Collides with Car on Flutie Pass