FRAMINGHAM, MA - Ok, it was April 1st, and someone posted the following on their FaceBook wall; "Obama Lands at Marlborough Airport". Now this is something that would seem strange even if it wasn't April Fools Day.

Several "hahaha" replies quickly follow and accusations of, "very funny, April Fools, huh?" start to fly. One friend comments that it wasn't even possible, claiming the President's aircraft only land at military air bases.  The original poster followed with details. 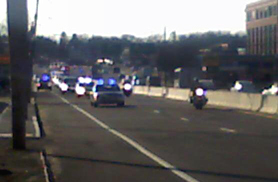 President Barack Obama's motorcade travels east on Rt. 9 just after Framingham Center, on his way from Marlborough Airport to the MEMA bunker in Framingham. (Photo courtesy of Cameron Goddard, 4/1/2010)

It appears President Barack Obama's helicopter did land at the tiny airport in Marlborough, (just off Rt. 85 on Farm Rd).  And, it also appears some Facebook postings traveled faster than the President himself, as locals in Marlborough who had become aware that the Secret Service,  state and local police and others were setting up a secure area at the airport began leaking news of the unannounced visit using the popular social networking site.

The President had been in Portland, Maine speaking about the health care bill to a very receptive audience until just before 4:00pm.

After landing in what many considered "too small" of an airport for the President -- there he was, exiting the helicopter and briefly waving to the crowd which had gathered beyond police lines.  The President then got into a waiting SUV, and led by Massachusetts State Police motorcycle escorts and an entourage of local, state and federal police and other officials, the motorcade traveled east onto Rt. 9 and into Framingham.   Their destination was the Massachusetts Emergency Management Agency, (MEMA), bunker which is located just after the State Police barracks, eastbound on Rt. 9 in Framingham.

The President, along with Gov. Deval Patrick met with MEMA officials and reviewed their response to the flood, damage control measures already taken and recovery plans.

Earlier in the week,  the Governor requested that several Massachusetts counties be declared Federal Disaster Areas.  Tapping into federal resources, Patrick called up the National Guard who arrived to help with sandbagging efforts,  large scale pumps and flood clean up.  By being declared a disaster area, the state, as well as individuals citizens and business owners [who sustained losses from the storm] may now apply for financial help from FEMA, (the Federal Emergency Management Agency).

Not everyone was as happy as the crowds that saw Obama in Maine, Marlborough and Framingham.   What may have been a cruel April Fool's Day Joke, or possibly just a misunderstanding, crowds also gathered in Fall River, then left diasappointed hours later,  once they realized the President had never planned to, and would not be coming to their city.

How to Register for Flood Assistance
Individuals and business owners, who sustained losses can register by calling the FEMA Help Line at 1-800-621-FEMA (3362).   You can also or  register online at www.fema.gov Information on the site indicates that the registration process will take 18-20 minutes, and a citizen who sustained both personal and business losses can register both on a single application.

NOTE: If you, your spouse or a minor child in the household are a U.S. Citizen, Non-Citizen National, or a Qualified Alien and do not  have a Social Security number, FEMA will not be able to complete a registration, (social security number is required for ID verifcation purposes).

Comments Off on Obama in Framingham - April Fools?