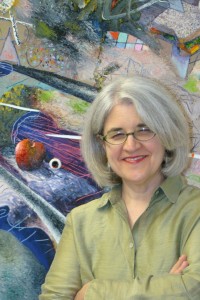 FRAMINGHAM, MA - The Danforth Museum of Art is pleased to announce that Executive Director Katherine French was awarded the "She Has Impact" award at the Metrowest Chamber of Commerce Women's Initiative Awards Dinner Tuesday night. The award recognizes French's significant contribution in expanding the quality and reach of the Danforth Museum of Art during her five year tenure.

Bonnie Biocchi, President and CEO of the Metrowest Chamber, noted that, under French's direction, the Danforth has tripled its membership, increased individual donations by 27%, and expanded the operating budget 36%.

The Museum has been recognized with several awards for curatorial excellence and was named “Outstanding Cultural Organization for 2008” by the Massachusetts Art Education Collaborative.  “Under Katherine's leadership, the Danforth has become a premier attraction not just for Framingham but across New England,” Biocchi said. She also commended French for the development of curriculum-based learning for thousands of school children, the creation of a teen docents program, and for curating a number of award-winning exhibitions.

Amy Rossi of Bernardi Auto, one of several area women to nominate French for the award, noted that “Katherine is a continual inspiration to all by encouraging appreciation and understanding of art through her knowledgeable, open and unpretentious manner.”

This is the third annual awards dinner sponsored by the Women's Initiative at the Metrowest Chamber of Commerce (www.metrowest.org). The Initiative is designed to encourage businesswomen to take on roles of leadership. Other Award recipients included Karin Semiziglou from TDBank and Christine Wyman Rossi from EMC.

About the Danforth Museum of Art

The Danforth Museum of Art was established in 1975 when a group of community activists, educators, business leaders, and art lovers organized what remains the only fine art museum in the MetroWest region of Massachusetts. Today, the Danforth Museum of Art maintains a collection of over 3,500 works of American Art, with a special focus on painterly expressionism. The Danforth Museum is admired for outstanding exhibitions and educational programming that connect people to the Museums mission, which is dedicated to the celebration and creation of art.