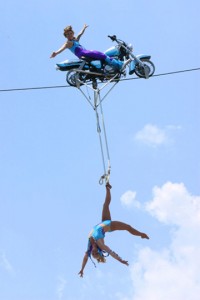 Una's performances are part of Paramount Harley-Davidson's open house event.  In addition to the high-wire act, Richard Turner, "The Cheat" will be performing dazzling sleight of hand card manipulations.  There will be a kids corner with family fun activities, music, food, prize give-aways, (along vendors and open house specials on motorcycle gear).

Also planned for the day is a H.O.G., (Harely Owners Group), Motorcycle Show with judging starting at noon and and trophy's awarded at 3:00pm.  While you're checking out the bikes, grab a $5 per plate BBQ lunch "while it lasts".

Events are planned throughout the day, from 9:30am until 4:30pm.

Comments Off on Circus Una Motorcycle Aerialists at Paramount HD