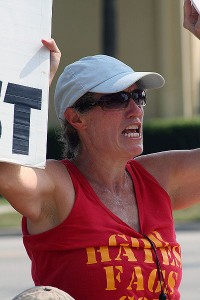 Shirley Phelps of the hate group that calls itself the Westboro Baptist Church.

FRAMINGHAM, MA - I got a call yesterday afternoon. The woman said a reporter left a message saying they were from Framingham and wanted to interview her, but didn't leave a call-back number, so she searched the internet and found the phone number for framingham.com

She asked if she was reaching "a news outlet", and I told her we do run some news articles along with other Framingham local community information.

Then I asked her, "Did you do something newsworthy?"

Her short reply,  "we picket".

She said her name was Shirley Phelps-Roper.  Then she said, "we were going to picket in your town on the 4th, but we're going to come on the 3rd instead so more of the kids will be outside the school than will go to that fag play".

She told me she's "the lawyer for the [Westboro Baptist] church", and that she answers the phone calls and email.  Then rather proudly mentioned that she is one of 13 siblings, and she herself is the mother of 11 children.

Knowing I was talking to someone who loves the sound of their own voice, I gave Shirley a go-ahead "uh-huh" and said, "Oh, you're from that church in Kansas", and mentioned I'd read "something about it".

Shirley went on about The Laramie Project and why her church pickets the play. She told me "God killed Mathew Sheppard in Wyoming because his enabling parents let him be a fag", and added, "if it was some hooker instead of that druggie queer that got killed nobody would even care". 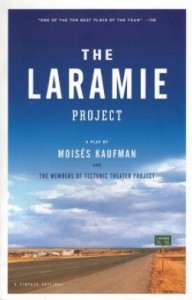 The Laramie Project will be performed at Framingham High School, Friday & Saturday December 3rd and 4th, 2010. Shirley Phelps-Roper, spokesperson for the Westboro Baptist Church contacted framingham.com and said her group has changed its plan and will instead try to picket outside Framingham High School on Friday the 3rd so more kids will see them protesting.

This was promising to be a different kind of conversation than I have with most 50-something moms.

Changing the subject, I said, "Don't you guys picket at military funerals too?"

Shirley went on to tell me how "all those kids in the military are getting godsmacked". She kind of lost me for a minute, all I could think of was the band, (Godsmack).

Shirley chuckled an evil little "heh-heh-heh", then showed me how the connect-the-dots puzzle in her head works; she explicated "God smacks them --- they are smacked down by God and coming home torn up by cheap IEDs because they protect a country that tolerates queers."

I had a hard time connecting the dots the way she had, so I pressed her a bit and asked, "Are you guys against war?"

She tried to go back to the IED thing, so I interrupted and refined my question giving her a situation from history; "What about WWII -- when U.S. Soldiers were killed fighting against oppression in Europe and Germany?".  Her first response was, "I don't care about that, I wasn't around then", then added "the thousands that were killed was because God smacked them down"... she added a few religious sounding phrases  -- then, seeming to dismiss the entirety of World War II and qualify her view she blurts out, "Eleanor Roosevelt was a dyke".

I told her I had never heard that, [rumor or fact], and she told me to look it up.  I said I would, but that I wanted to know more about the picketing of military funerals -- and asked another question -- I wanted to see how her logic works when the combatants are neither American or gay.

I told her I have a friend from Zimbabwe, and that the President there is a dictator and is oppressing the people -- and that there have been civilian uprisings resulting in armed conflicts with military and police.  What I asked was, "In that case -- who would God be smacking down, the oppressive dictator and his army, or the civilian rebellion?".  Shirley didn't seem to know much about Zimbabwe but assured me that whoever got killed it would be "God discomforting them".

"Discomforting" -- the word threw me for a minute,  so she gave me her definition -- it's how "God allows people to raise their kids wrong for 20 years or so then smacks them down to punish the fag enabling parents". 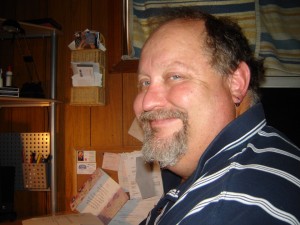 Nate Phelps, Shirley Phelps-Roper's brother fled the cult-like influence of their father when he was 18 years old. He was ex-communicated by the family but now uses his website, blog and public speaking opportunities to warn others of his father's extremist views and helps anyone who has "suffered similarly from religious extremism". He even has a section on his website called "Postcards From Home" where he openly answers questions from Phelps family members and attempts to get them to give up the hate based teachings of their father. Visit Nate's website at: http://natephelps.com for his story.

I gave Shirley another "uh-huh", and changed the subject again.

I asked Shirley if her church had regular services for the local community -- in Topeka -- and specifically if they did anything to help people.

She started to rattle off other places around the country where they've picketed and said their mission was to be on the road spreading the word that "God Hates Fags", that "America is Doomed" and that she had picketed at Martin Luther King Jr's funeral, (saying he was an adulterer), then mentioned a few more names of famous people who've been killed.  She wrapped up her spiel naming a few places where she had picketed in the past few weeks; the  "General Assembly in New Orleans", "The pipeline explosion in San Francisco" -- but paused, corrected herself, and said "San Bruno".

I said, "No, not the picketing" and told her how in Framingham people from churches visit sick or elderly shut-ins, sponsor kids programs and community events, run food pantries and do other work to help people -- like for Thanksgiving -- serving meals to the needy.

She blathered on about how Thanksgiving in America, and the whole "Holiday Season" including Christmas had nothing to do with God, and that was not what Christ was about, and then threw in more phrases that sounded half-like bible references mixed with her litany of hate and that America is Doomed -- well, everyone except Shirley and her family.

I say "Shirley and her family" because most estimates are that 50 of the 75 or so members that make up the congregation of Westboro Baptist Church are all inter-related.

Shirley said "those churches are not true to what Jesus taught and that their talk about acceptance and diversity are why God Hates America".  Mind you, she had no idea which denomination or churches I was referring to or their stand on any issue.  Basically, it appears any other church except WBC has the whole God-thing "wrong".

When I pressed her more about any good work her church does, she said, "we, um.. ah, No child Left Behind, we teach kids to read".

A series of forums billed as ''The Framingham Project - a Love is Louder Campaign'' have been held over the past month with topics ranging from Cyber Bullying and Teen Suicide to Organized Religion, Sexual Orientation and First Amendment Rights.

Shirley's pipeline explosion reference had to do with 8 people being killed and houses being blown up by a gas pipe fire in San Bruno, CA on September 9, 2010.  As Shirley's mind began connecting dots again, she stepped through her logic; since San Bruno is just south of San Francisco -- that for choosing to live and work near "all those perverts and queers", God blew up that gas pipe and killed those people.

It seems along with fags, druggies, American soldiers, and all other Churches -- Shirley and her family also hate Jews and Israel ...and the country of Sweden, (Swedes again, have something to do with "queers").

I told Shirley I'd probably come to the picket line and take some pictures.  She reminded me she'll be here on the 3rd not the 4th.

The scope of things Shirley considers "godsmacks" range from floods in China to Space Shuttle Explosions -- everything is because God  hates the person or person[s] that are "smacked", or their parents, or someone that lives near them, or the entire country they live in, or simply for not being out in the street holding up a sign selling her family's brand of discount generic hate.

As the call was ending, I think she thanked me for interviewing her, but honestly, my mind was wandering to what type of cleaner I could use to disinfect my phone -- and thinking that I really should wash my left ear out with soap.

http://www.patriotguard.org/ - Patriot Guard Riders, motorcycle group that rides to military funerals and blocks and drowns out any protesters.

[no links given] - Westboro Baptist Church operates several hate group websites with names like  "GodHatesFags" and "GodHatesTheWorld" listing who and what to hate, on a country by country basis. We do not provide links to these types of sites.