Downtown Framingham Traffic About to Get a Little Worse 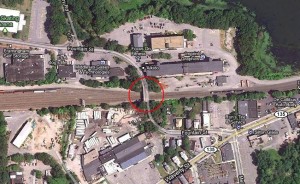 The Fountain St. bridge is frequently used to avoid Downtown Framingham and navigate to and from the Merloni Baseball Complex, Loring Arena, Keefe Tech, Fountain Street Galleries, (and other businesses located in the former Bancroft Cap factory), and the surrounding area. Map courtesy of Google Map, http://maps.google.com/

FRAMINGHAM, MA - Long recognized as one of the worst things about Downtown Framingham, traffic along the Rt. 126 corridor through the Rt. 135 intersection and rail crossing is about to get even worse -- temporarily.

Construction is slated to begin June 23, 2011 to replace the Fountain St. bridge which some motorists use as an alternate route to avoid the traffic choked Downtown central district.

MassDOT and its contractor estimate the project will take 97 days and, baring any unforeseen circumstances, the projected bridge re-opening date is set for September 27th, (2011).

The $2.3 million dollar state and federally funded project includes replacement of the bridge where it carries traffic over the MBTA and CSX railway, and includes "some minor approach work".

Town officials coordinated with MassDOT to move the construction start date to the day after the 2011 school year closes to lessen the impact and avoid school bus re-routing issues, (the work was originally scheduled to begin on May 31st).

Detours caused by the project will force more traffic onto the already congested Winter St. bridge near Keefe Tech and the La Cantina restaurant to the west as well as onto Concord St., (Rt. 126), to the east.