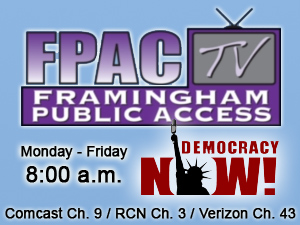 According to McColgan, FPAC-TV received a "very large number of requests" from Framingham residents to have the show broadcast on the town's public access station.

The show is scheduled to air weekdays (Monday through Friday) at 8:00 a.m. beginning the first week of August.

The program, which offers "a perspective not seen in U.S.corporate-sponsored [news] media" is hosted by journalists Amy Goodman and Juan Gonzalez.

Below is a sample Democracy Now! episode of "National and Global News Headlines" originally broadcast on Friday, July 29th, 2011. The  station also hosts and broadcasts debates, special reports and other news programming.

According to the Democracy Now! website, (www.democracynow.org), the program "is funded entirely through contributions from listeners, viewers, and foundations."  The website emphasizes, "We do not accept advertisers, corporate underwriting, or government funding. This allows us to maintain our independence."

Democracy Now! is aired on over 900 t.v. and radio stations, and is also available online via podcasts, via their YouTube Channel, Vimeo Channel, and other over-the-air and digital media outlets.

In Framingham, Democracy Now!, (and other FPAC-TV programming), can be viewed on public access channels  Comcast 9, RCN 3, and Verizon 43.

Comments Off on FPAC-TV to Run "Democracy Now!" News