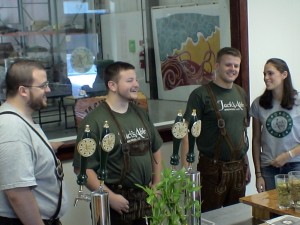 FRAMINGHAM, MA - For the past few months people around Framingham have been hearing a lot about Jack's Abby Brewing.

Brothers Jack Hendler, Eric Hendler and Sam Hendler -- along with Jack's wife "Abby" have been making appearances throughout Framingham and area towns touting each new beer as they ramp up production.

Today, Framingham Selectman Dennis Giombetti, along with Bonnie Biocchi, (President, MetroWest Chamber of Commerce), Donna Kelleher, (Chair, Chamber Board of Directors), Bill McGinley (Member, Chamber Board of Directors), and a host of friends, family, media and beer lovers met in the tasting room of the brewery for the official "Grand Opening" and ribbon cutting ceremony.

The brewery now produces four core lagers; "Saxon Sons Pilsner", "Hoponius Union", "Smoke & Dagger" and "Red Tape Lager" -- the last one is named for the amount of red tape the brothers went through to start up the brewery.

A special seasonal brew, "Copper Legend", (an Octoberfest Lager), is also in production at the brewery which aims to create "distinctive, locally crafted lagers". 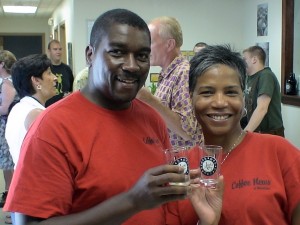 The public is invited to visit the brewery during tasting room hours to sample the various brews, and to see the beer being made and learn about the brewing process.

There's also a small gift area where visitors can purchase t-shirts, glasses and other souvenir items imprinted with the Jack's Abby Brewing logo.

(Check the calendar on the brewery's website for tasting room and tour hours).

The list of establishments serving Jack's Abby is growing! You can enjoy a cold glass (or two) on tap at The Chicken Bone,  British Beer Company, The Tavern and La Carreta in Framingham, and at the  Horseshoe Pub in Hudson and the  Noon Hill Grill in Medfield, MA.