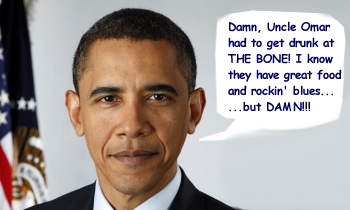 Was it actually President Obama's Uncle Omar Arrested near the Chicken Bone Saloon on August 24th, 2011?

FRAMINGHAM, MA - "The Australian", an Australian newspaper is reporting that Onyango Obama, the driver of the SUV who nearly hit FPD Officer Val Krishtal and was subsequently arrested for OUI near the Chicken Bone Saloon in Downtown Framingham on August 24th is Barack Obama's uncle.

News reports also say that Onyango Obama is being held for deportation as an illegal immigrant.

The story has also been reported by several other newspapers and media outlets including Fox News and The Washington Times.

The Washington Times article quotes Framingham Police Public Information Officer, Lt. Delaney as saying Onyango Obama said, "I think I will call the White House" when he was being booked at the Framingham Police station on the OUI charge on the 24th.

In the President's Book, "Dreams From My Father", the President mentions an "Uncle Omar" and says he moved to Boston, and then was "lost". Other sources say that Uncle Omar has been living in Cambridge and the greater Boston area since the 1970's and is the child of President Obama's grandfather Hussein Onyango Obama, by his third wife.