Pies On The Common Adds a Bit of Cheescake 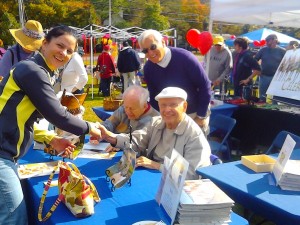 Judy Jackson gets her copy of the ''CELEBRATION 2012'' calendar autographed by Mr. February at the First Parish in Framingham's annual ''Pies On The Common'' fair on Saturday, October 15, 2011

FRAMINGHAM, MA - It was a perfect fall afternoon to wander down to Framingham Centre for the 21st Annual Pies the Common craft show and pie sale -- a fundraising event sponsored by First Parish in Framingham Unitarian Universalist Church.

Along with the pies, this year's event featured a bit of cheesecake -- the naked old guys from the First Parish in Framingham were there, (with their clothes on), autographing their now world-famous "CELEBRATION 2012" photo calendar.

Twelve gentleman from the First Parish, all between the ages of 64 and 87, posed au natural, (yup -- that means "naked"), for a fund raising calendar which, "boldly proclaims the joys of being an older man whether 64 or 87 with whimsy and humor".

News of the calendar has spread literally around the world, making headlines from Boston to London -- and featured on Jay Leno, on MSNBC News, and many other t.v. shows. 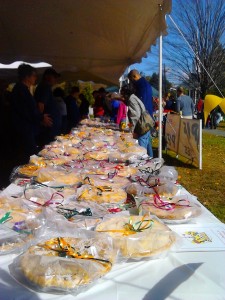 Hundreds of home baked pies on sale at the Framingham Centre Common.

This isn't the first time First Parish has published one of these very tastefully done teasers.  In 2006 a dozen women from the church, (also age 64 to 87), posed in the buff for a calendar celebrating "ageless women".

Members of the First Parish got the idea for the calendar from the (2003) movie "Calendar Girls", (which starred Helen Mirren), a true story of twelve "church ladies" from the English coutryside who posed nude for a calendar to raise money for the Leukemia unit in their local hospital after one women's husband dies from the disease.

While the calendar guys drew plenty of attention, the real stars of the day were the hundreds of home-baked pies on sale.

Apples, blueberries, pecans -- if you could bake it into a pie, it was there! Whole pies sold for $14, or you could mix-and-match and sample slices of several different pies for $2 a piece.

Aside from the guys and the pies, there were over 30 booths of crafts, antiques, jewelry and gift items -- and several more booths and tables of  food including hot dogs,  sausage sandwiches, homemade fudge, cakes and other baked goods. 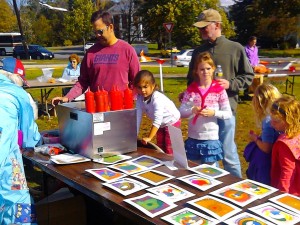 Kids create spin-art at the ''Pies On The Common'' craft show and pie sale at Framingham Centre Common, October 15, 2011.

Band members and supporters from Framingham High School set up a booth and were selling "Framingham Flyers" scarves and other items imprinted with the school's blue and white Flyers eagle logo, and raffling off an X-Box and other items to raise money for student activities.

There were games and activities just for kids and the ever-popular "spin-art" machine -- all in all, it was a family fun day with something for everyone!

For each of the past 20 years, a traditional handmade quilt made by members of the the First Parish on Framingham is raffled off -- this year makes twenty-one!

Photos of most of the quilts can be seen on the church's website: www.uuframingham.org

If you couldn't make it to the common, but want to purchase one of the "Celebration 2012" calendars, (the one with the naked old guys in it), you're in luck!  The calendars can be ordered online from a special website the First Parish set up at: www.fpfcalendar.com