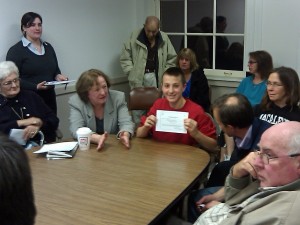 After arguing his own case before the Framingham Board of Health, Peter Jacobson proudly displays the permit he was granted to keep six chickens at his Maple Street home. (October 25, 2011)

FRAMINGHAM, MA - Some might think a Board of Health meeting would not draw much of a crowd, but the Tuesday October 25th, 2011 meeting of the Framingham Board of Health overflowed into the hallway outside the 2nd Floor Conference Room of Town Hall, (the Memorial Building).

Among other issues before the board, an application for a permit to keep chickens was on the agenda.

While that would not be any news at all in many parts of the United States, it was a landmark decision of sorts -- and an example of how the average citizen in Framingham -- regardless of age, can be heard and have government address their needs and desires.

In Framingham, the BOH must issue a permit for anyone to keep even one chicken.  Jacobson had submitted an application for a permit to keep six, and included a drawing of coop he plans to build himself.

Although he was accompanied by his mother to the 8:00pm meeting, the self-described animal lover spoke on his own behalf and answered all questions posed by the board and those who spoke to object to his application. 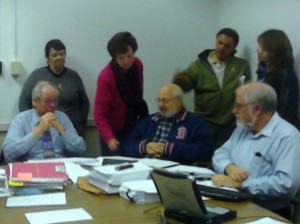 Betty Muto, (standing, center), Precinct 12 TM Chair and Member of the Real Property Committee argues with the Framingham Board of Health to withhold a permit for FHS student Peter Jacobson to keep six chickens at his home -- Muto citing the possibility of future zoning or bylaw changes which may not allow residents to keep chickens at all in residential areas.

During the meeting, Betty Muto,  (Town Meeting Member, and Precinct 12 TM Chair), addressed the Board and requested the BOH not grant Jacobson the permit -- instead suggesting Jacobson return at a later date as the Town's Real Property Committee (of which she's also a member) is currently reviewing "land use issues" including the keeping of chickens in residential neighborhoods.

Muto then raised concerns saying that she lives at 35 Neville Road which is a few houses away from Jacobson's Maple Street home, and she was not notified in advance of the hearing and had only heard of the permit application because she was in Town Hall on other business.

Muto suggested that notices should be mailed out to everyone in her neighborhood -- or possibly a newspaper notice should be published so that others in the area would have a chance to address their concerns about chickens being raised in their neighborhood.

In accordance with standard procedures, Jacobson had already notified all abutters to his property, and received several written letters in support of his application.

Muto again raised the concern that changes to Framingham bylaws regarding keeping chickens in town was in the works -- at which point she was asked if she was speaking on behalf of her committee, or on her own behalf as a resident.

Muto attempted to explain that she was speaking in both capacities -- but her objection was over-ruled when BOH member Nelson Goldin said that sufficient notice had been given to neighbors, that Muto's personal objection was noted, but that he would not consider future changes to bylaws or zoning which may or may not affect the issue before the board -- that the bylaws as written "today" are what the BOH must go by.

One other resident objected to Jacobson being granted the permit, complaining to the Board that someone raising chickens in her neighborhood would affect her property value -- and suggesting that if Jacobson was granted a permit, soon everyone in the neighborhood could have a chicken coop.

Although Jacobson attempted to keep his mother from speaking, she did make one comment to the board -- that Peter would be leaving for college in two years, and that he had researched the project, done all the work to prepare the coop plans, permit application and wanted to do it all himself -- and that she was sure he would be conscientious about keeping the chickens -- that this was something he wanted very much to do.

After her comment about Peter leaving for college in two years, a member of the public asked if the permit could be granted for just two years.  Peter himself, spoke up and asked that the board not place a two year restriction on the permit, citing the fact that his family may want to continue to raise the chickens in the future. 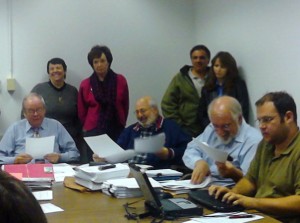 Framingham Board of Health Members, (seated, L-R), Dr. David W. Moore, Nelson Goldin and Ethan Mascoop joke with Peter Jacobson that they don't want to hear from his mother later that he wouldn't clean his chicken coop, just before issuing him the permit to keep six chickens.

Deliberation continued addressing possible noise and other concerns. Framingham Animal Control Officer Katherine MacKenzie, who was in attendance as several dog related issues were also before the board was asked if she had received complaints from neighbors of anyone else in town who kept chickens.  She stated that she hadn't.

It was noted that the permit would only allow chickens and not roosters, (which crow early in the morning), and that chicken only cackle and are relatively quiet animals so noise should not be an issue.  Jacobson also noted that the area in his back yard where he plans to construct the coop is blocked from neighbor's view by shrubbery, and the chickens would not be running loose on the property -- that for all intensive purposes, neighbors would not even know the chickens were there.

Reviewing the drawing of the planned coop, BOH members commended Jacobson on the design, addressed the issue of "setback", (which refers to the distance a building must be from property lines),  and commented to Animal Control Officer MacKenzie that she probably had not seen such a nice chicken coop anywhere else in town.

Jacobson was advised that in Framingham, anyone issued a permit to keep animals is notified that Animal Control and the Board of Health can make unannounced visits to their property at any time to check on the condition of the animals, and that permits can be revoked if violations are found.

Amid a round of applause from many on the room, a 9:05p.m., Jacobson was issued the permit.