For three days, WAAF on-air personalities LB and Spaz will rise up on boom cranes, where they will live on a platform suspended high in the sky for three full days in an effort to raise funds for The Greater Boston, Worcester County and New Hampshire Food Banks. For the past 20 years, the station's personalities had enlisted themselves in various physically challenging stunts in an effort to engage listeners to support area food banks.

Beginning at 7:00 a.m. on December 4, LB will "rise up" in a boom crane located at Yale Appliance in Dorchester, MA (296 Freeport Street) where he will stay suspended on a small platform until 7:00 p.m. on December 6th. 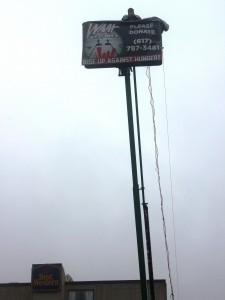 Spaz will do the same, rising up against hunger in the Metrowest area, where he will live high in the sky on a boom crane for three days at the Best Western/British Beer Company on Route 9 in Framingham, MA, (130 Worcester Road).

Listeners are encouraged to visit LB and Spaz during the three days they are hanging in the sky and make a donation to "WAAF's Rise Up Against Hunger" campaign.

WAAF Program Director Ron Valeri says: "LB and Spaz will be homeless outside in the cold and high in the air for three straight days to raise awareness about hunger.  We're asking our listeners to Rise Up Against Hunger with them, because they can’t come down until donations go UP!"

To raise additional funds for the food banks, WAAF personality Greg Hill will stay on WAAF's airways around the clock for the entire three days, December 4-6, 2012, encouraging listeners to show their support for the cause.

Complete details, including information on donating to "WAAF's Rise Up Against Hunger" are available on the station’s website, www.waaf.com/riseup. 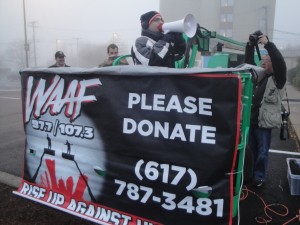