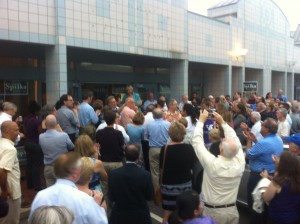 FRAMINGHAM, MA - On Monday, July 1st, 2013, Karen Spilka launched her congressional campaign in front of over 200 supporters who braved the weather and the heat to show their support for her run for U.S. Congress.

Karen was introduced by Bobby Bower of the Massachusetts AFL-CIO, who referred to Karen as a champion of the middle class and someone who knows how to get things done. Her remarks focused on her ability to deliver results and her desire to get to Washington to work with President Obama as she has worked with Governor Patrick here in Massachusetts.

Said Karen, "I spent the last 12 years on Beacon Hill taking on challenges no one else would, and now I am ready to do the same in Washington. I want to help President Obama move our country forward, as we have moved Massachusetts forward."

Speaking about the crowded primary field, Karen added, "In October, the voters of the 5th Congressional district will have a wealth of great choices. The other candidates in the race are friends of mine and good people and we all largely agree on women’s health, assault weapons, protecting the environment, marriage equality, and likely most of today’s hot topics. But this race will be about who can best deliver on our progressive principles in a Congress mired in gridlock and obstructionism. I have a proven track record of taking on the difficult challenges and getting results."

She closed her remarks by highlighting some issues she intends to tackle if elected to Congress:  "I want to work with the President to amend the Affordable Care Act, ObamaCare, to have a national unified billing system copied from our system in MA which will save taxpayers billions. I will fight in Congress to help the President's efforts to address climate change. I will advocate for middle class tax reform. I will lead the effort in Congress to find funding for President Obama’s executive order to rebuild America's electric grid infrastructure."

Karen pledged to draw on her empathy and diplomacy to navigate the dysfunction of Congress and to work hard everyday to deliver for Massachusetts. Thanking the overflow crowd, she asked people to get involved and volunteer, declaring this race not her campaign but "our campaign."