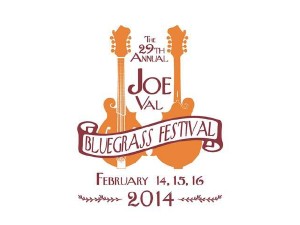 Year after year, this nationally acclaimed celebration of bluegrass music and its fans continues to win new converts while delighting seasoned veterans. The region's top wintertime roots music festival features three days of national and regional artists on the Main Stage, the next generation of rising stars on the Showcase Stage, and an extensive lineup of education programs including Master Classes, Workshops, instructor-led Jam Sessions, and the renowned Joe Val Bluegrass Academy for Kids.

The Festival features all this, plusinstrument vendors, luthiers, and of course, picking around the clock. If you're new to bluegrass, you'll enjoy a veritable primer in nearly all facets of this original American art form -- while longtime fans will appreciate the wide range of talent on display. Festival favorites The Gibson Brothers, perhaps the most decorated band in bluegrass today, will demonstrate just why they walked away with four awards from the International Bluegrass Music Association (IBMA) in 2013 including the coveted Entertainers of the Year.

Junior Sisk the IBMA's 2013 Male Vocalist of the Year will be on hand as well, fronting his hard-driving, traditional band Ramblers Choice. The dynamic IIIrd Tyme Out will be unveiling a strong new lineup in support of lead singer and powerhouse Russell Moore. Blue Highway, perhaps one of the most esteemed and influential bands in contemporary bluegrass will be featuring new original material from their album The Game, to be released this January.

Popular songwriter and Sirius-XM radio personality Chris Jones and his band the Night Drivers will also be on hand to showcase some of today's finest newly composed bluegrass songs during their set.

Fans of country music -- both modern and traditional -- will not want to miss a special acoustic reunion performance by the three co-founders of the Desert Rose Band: Chris Hillman (Rock and Roll Hall of Fame member, formerly with the Byrds and the Flying Burrito Brothers), Herb Pedersen (the Dillards, Laurel Canyon Ramblers, Old and in the Way, Emmylou Harris), and John Jorgenson (Elton John, Bob Dylan, John Jorgenson Quintet). During the late-'80s, this versatile ensemble chalked up seven top-ten country hits while never losing sight of their roots in bluegrass, folk, and honky-tonk traditions.

Dedicated to preserving the past and nurturing the future, the Boston Bluegrass Union continues its commitment to education with daylong Master Classes kicking off the festival on Friday. On Friday night, Saturday, and Sunday there will be over fifty Workshops and Directed Jams for festival patrons of all ages that examine the instrumental and vocal techniques unique to bluegrass, as well as the music's history and culture.

The BBU helps train the next generation of musicians with the Joe Val Bluegrass Academy for Kids, now in its 12th year, presenting a free, intensive three-day program that teaches children (ages 5 - 17) how to play, sing, and perform bluegrass music. Visit the festival website for further details on the extensive education offerings, schedules and registration details.

Established in 1985, the Joe Val Bluegrass Festival celebrates the legacy of the late Joe Val, a pioneering Massachusetts-based vocalist, musician, and bandleader, whose riveting performances, recordings, and generous nature did so much to spread the popularity of bluegrass in the Northeast.

From its humble beginnings as a local tribute to Joe and the regional bluegrass scene, the festival has grown to become one of the most celebrated bluegrass events in the country. In 2006, the Joe Val Bluegrass Festival won the prestigious Event of the Year award from the IBMA. And in 2012, the festival was listed by USA TODAY as one of the Ten Great Places to Go to Bluegrass Festivals.

The Boston Bluegrass Union is a 501(c)3 non-profit, all volunteer organization, dedicated to
preserving and promoting this original American music genre. Celebrating our 38th season, the BBU is the premier source for events, education, and information on bluegrass music in the Northeast.