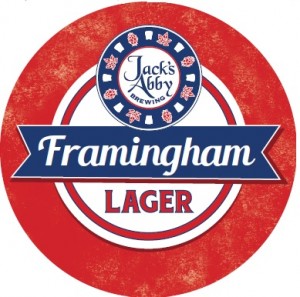 Framingham, MA - Jack's Abby Brewing, LLC is celebrating its 3rd anniversary by releasing Framingham Lager, a new beer that will give back to the local community. "Framingham Lager" will be released on Wednesday, June 18th, and a portion of all proceeds will be donated to the Downtown Framingham Renaissance organization for their efforts to revitalize downtown Framingham.

"We've been honored and humbled by the tremendous support the community has shown us over the past three years. We feel that the best way to give back to the community is to invest in it," said Jack Hendler, who founded the brewery with his younger brothers Eric and Sam. "We wanted to brew something that everyone could enjoy. Framingham Lager is a traditional American pale lager, but brewed without any of the adjuncts common to the style."

In the three short years since they opened, Jack's Abby has garnered several awards in the brewing industry, and made a name for itself locally by focusing entirely on craft brew using traditional German techniques to create new lagers.

Framingham Lager is a traditional American style lager brewed with 100% 2-row malt and 100% real hops, no adjuncts. Draft will only be available in Framingham, 12-packs will be distributed throughout Massachusetts.