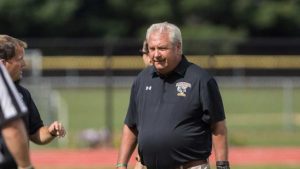 “I cannot express how grateful I am to have been the head coach of the football program at Framingham State for the past 13 seasons. As a former player, I could not be more proud of our teams and all the fine student-athletes who have come through the program,” said Kelley. “I was lucky to be surrounded by great coaches on our staff throughout the years that helped lead our teams to so much success. At this point it is time for me to step away from coaching with the program sitting in a great spot coming off back-to-back NCAA Tournament appearances. It’s time to put the horse in the barn.”

Kelley, who has served two stints as the Rams head football coach, will remain the Rams Athletic Director. Kelley is a 1976 graduate of FSU where he played defensive line for four seasons and his first stint as the Rams head football coach was from 1982-84. After stepping away from coaching for two decades, he assumed the reigns again in 2007 and has guided the Rams on a historic run of success. Kelley will assume additional responsibilities with the Office of Development and Alumni Relations and will play a key role in engaging alumni, especially the student-athletes he played with and coached over the years.

Kelley has an overall record of 107-59-1 as the Rams head football coach including a 100-40 record over the last 13 seasons which featured an NEFC Championship, nine MASCAC Championships, five NCAA Tournament appearances and four bowl game victories. In addition to the team success, the Rams first two AFCA All-American’s played during Kelley’s tenure, one on the offensive side of the ball and one on the defensive side.

“I am deeply grateful to Coach Kelley for the outstanding job he has done leading our football team over the past 13 years,” said University President Javier Cevallos. “He took a program that had struggled to win for decades and turned it into a conference powerhouse. I admire Coach Kelley not just for the success he has achieved on the field, but for the job he has done mentoring our student athletes off the field. He is beloved by so many of our alumni.”

Framingham State University anticipates having an announcement regarding its next head football coach in the coming weeks.