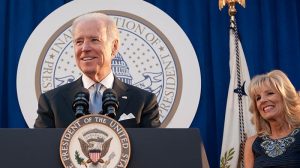 Winning the state of Pennsylvania pushed Biden ahead of the 270 electoral votes needed to win.

While the results are not yet "certified",  on Saturday most major news outlets including The Associated Press, The New York Times, CNN -- and even Fox News declared Biden the winner of the 2020 Presidential Election.

Nearly four days after the election closed (on November 3rd), and even though a small number of ballots have yet to be counted, it is clear that Biden won by both the popular vote and the electoral college.

While Biden appeared to be behind in many battleground states on the eve of the election -- millions of mail-in ballots in Pennsylvania, Michigan, Nevada, Arizona and Georgia could not even start to be counted until November 4th.  Many Republicans chose to vote in person on Election Day and those counts showed up early due to how election results are reported -- but Democrats had cast millions of mail-in ballots prior to the election.  Mail-in ballots heavily favored Biden -- by up to 75% on some areas.

With the heaviest voter turnout in history, approximately 75 million people voted to elect Biden -- more than any other American President.