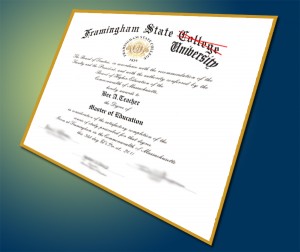 Will a degree from Framingham State University look better than one from a mere college? And what to do about those who routinely shorten the name to "FSC" ? , (initials which no longer fit!)

FRAMINGHAM, MA - "Framingham State University" is now the official name of the school which has sat atop Bare Hill since 1853.

The school was originally founded in 1839 as a state-funded "Normal School" to standardize, (or "normalize"), the training of teachers in America.

The Normal School was first located in Lexington and then Newton, MA and after outgrowing both locations moved to Framingham where it has flourished and grown for more than a century and a half.

An act which became effective October 26, 2010 changes M.G.L. Ch. 15A, Sec. 5, and creates sub-sections of the law which in addition to renaming (6) colleges, breaks the state's system of higher education into three segments;

In the reorganized MA higher education system, Framingham State as well as the Bridgewater, Fitchburg, Salem, Westfield and Worcester state colleges are now named and classified as state universities.

For Framingham State, a primary reason for the name change is to reflect the expansive and varied degree programs the school now offers -- a school which until 1964 was limited to the single purpose of "training women to become teachers".

From it's original  5 3/4 acres in 1843, the university now occupies more than 70 acres on and around Bare Hill in Framingham, and includes many recent improvements.  Recent additions, (some of which are still under construction), include new dorms, a modern stadium, an updated student center and many high-tech and energy efficiency related improvements -- all done in a way that preserves the historic New England look and feel of the campus.

No modern mention of "Framingham State" is complete without mentioning the Christa McAullife Center which is located on campus.  Christa would likely approve, and be happy that her alma mater has come into its own, truly a community of educators and scholars -- a university.