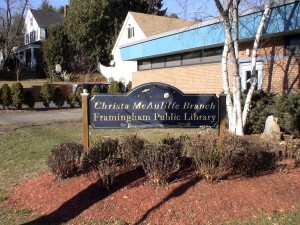 The Christa McAuliffe Branch of the Framingham Public Library is located on the corner of Water St. and Nicholas Rd. in Saxonville.

FRAMINGHAM, MA - I got my first library card at the Saxonville Branch Library when I was about 8 years old. That was in the late 1960's.

In 1988 the library was rededicated as the Christa McAuliffe Branch, after Christa, who grew up in Framingham, graduated from Marian High School in 1966 and from Framingham State College in 1970 was killed in the 1986 Challenger Space Shuttle explosion and after beating out every other applicant for the honor of becoming the "First Teacher in Space".

I'm probably prejudiced by the fact that I've been going to that library for over 40 years now -- but I don't think Framingham should move the McAuliffe Library to Nobscot.

For several years the Framingham Library Trustees have been trying to convince the Town to spend millions of dollars to build a new McAuliffe library.

The arguments for a new library have all been made; the current building was designed for 1/5 of the patrons it serves and books it holds; the building is not ADA compliant; the parking is across the street; and generally that it's just too small.

The idea that the State and Federal Government keep offering millions of dollars in matching funds grants for the construction of libraries drives local bibliophiles crazy. "Matching funds" are the operative words.

In 2004, after years of being on a waiting list for construction money, the McAuliffe Branch was awarded $1.65 Million as a provisional Library Construction Grant

There was a hitch though -- the community had to come up with the rest of the $5 Million to retain the grant and build the library.

In a Special Town Meeting, March 15th, 2005 , Article 2 on the Warrant asked Town Meeting Members to vote in favor of the funds, (to build a new library on the Pinefield Shopping Center property).

The article failed to get the required two-thirds of TMM votes.  The grant expired in May of 2005, but the idea of building a new library didn't. 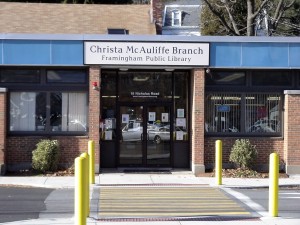 Formerly called the Saxonville Branch, the building which currently houses the Christa McAuliffe Branch of the Framingham Public Library may close when and if a new library is built in Nobscot.

In December 2005, improvements were made to the McAuliffe Branch for handicapped accessibility.

Recently the sidewalks were redone, the front entrance was expanded and a raised, textured walkway connecting the library to the parking lot across the street was added.

Library Trustees are now asking for even more money to build a $6.5 Million dollars library in Nobscot.

The old arguments and new plans are being bolstered by the fact that a larger grant is now available, but with the caveat that the Town will need to spend more to get it.

With that said, it may seem strange that I am 100% in agreement with the plan to build a library in Nobscot.  But,  even if money was not an issue, (which it is), I just don't like the idea of closing the Saxonville / McAuliffe Branch when Nobscot gets back its library, (Nobscot used to have a library -- I'll get to that in a minute).

The latest plan is to build a 17,000 square foot library in Nobscot to replace the 5000  sq. ft. one now in use in Saxonville. The new library is slated to be built on land next to the Nobscot Shopping Center.

In November 2010, the Library trustees put out an "RFP", (Request for Proposals).  Only two proposals came in.  One from the owner of Pinefield Shopping Center offering to sell the Town 2 acres at double its current value, and a second much more generous offer from the Rousseau family.

The Rousseaus are offering to sell the Town five parcels of land located next to the Nobscot Shopping Center. The parcels total 3.7 acres of land, and in such a prime location, the deal is practically a give-away.  The Rousseau's are asking $739,800 -- which is only the assessed value of the property. 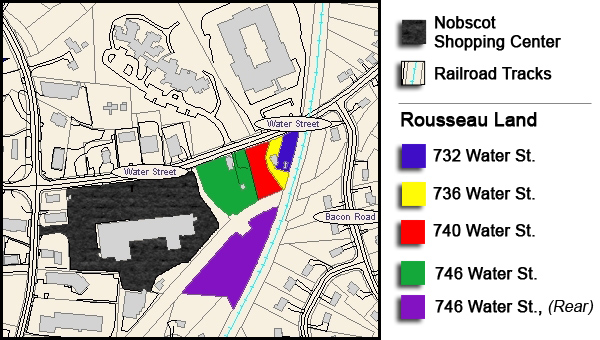 Five parcels of land owned by the Rousseau family are the site of a proposed new Nobscot library. The properties, located along Water Street abut the Nobscot Shopping Center and railroad property.

Newcomers to Framingham may not recognize the Rousseau name.  The family has been involved with business and development in Framingham for almost a century.  The 1950's Albie's Oil truck with its distinctive brown paint -- which is now only seen in parades and car shows -- is probably the most recognizable icon of the Rousseau family's Framingham legacy.

Albie's Oil was established in 1932 and operated along with a gas station on the corner of School St. and Concord St. in Saxonville until the year 2000. The family trust also owns several other Framingham properties strategically purchased decades ago next to railroad lines and other major intersections of transportation and commerce. 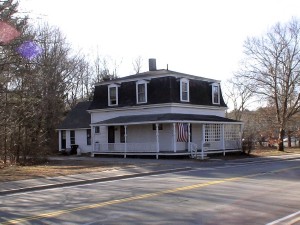 This home located at 746 Water St., in Framingham sits on the proposed site for new Nobscot Library.

The main house sitting on the 746 Water Street (front) lot with it's Mansard style roof could be renovated into a very suitable temporary library for far less than the millions now being proposed for a new building.

The Town should take to opportunity to buy the Nobscot land -- personally, I think the site is an excellent location for a library -- and so did earlier inhabitants of Framingham.

Back in the late 1990's, Bill Dyan, a local history buff, discovered a small building that looked like an oversized chicken coop sitting near the railroad tracks about 50 feet back from Water Street on the Rousseau property.

Bill's research uncovered facts that it was much more than a chicken coop -- it was (and is) an irreplaceable piece of Framingham history. 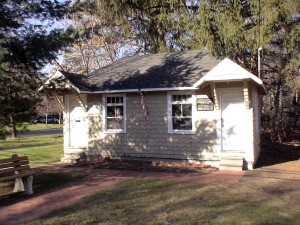 The multi-use building had once served as Framingham's oldest Post Office, and from 1905 to 1953, half of the building's 12'x24' space was used as a library, (called the "Nobscot Depository).

Aside from postal and library duty, the 300 square foot building also served as a railroad office, with a ticket window in back facing the railroad tracks.

In June of 2000, in time for the Town of Framingham Tercentennial, and thanks to Bill Dyan's and other's efforts and donations, the building was restored and moved across Water Street, where it sits opposite the proposed site for a new Nobscot Library.

Framingham's north side has gotten by with a branch in just Saxonville for the past 50 years, and one in just Nobscot for 50 years before that -- wouldn't it be nice if both villages had their own libraries?

My proposal, one I believe which has a better chance passing a Town Meeting vote, is for the Town to buy the entire piece of Nobscot land, but build a smaller library -- about 10,000 square feet, and leave the Saxonville Branch open.  The old Nobscot Post Office / Library could be moved back across the street to its original location (next to the railroad tracks) as a historic feature on the new library grounds.