"Common Ground" plays the Allman Brothers' classic "One Way Out" at Concert on the Green, Framingham, MA, July 15, 2011

Drawing a diverse mix the crowd included families with small children, teens, "twenty-somethings", baby-boomers, empty nesters, retirees and seniors --- all peacefully co-existing for a few hours to enjoy the open-air "Concert on the Common".

Covering tunes from Pink Floyd, Tom Petty, Eric Clapton, The Allman Brothers, Traffic and other classic rock favorites, the Common Ground band was a hit with everyone! 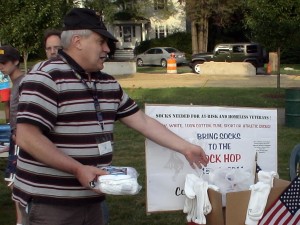 Socks collected at concert will be donated to ''Operation Stand Down'' which provides assistance to homeless U.S. veterans.

While the music played, people could browse the tables and tents setup by cultural and civic groups along the east side of the Centre Common

This week, Framingham Board of Health Nurse Kitty Mahoney and Peter Harvel, Director of Framingham Veterans Services organized a drop-off for concert goers to donate new white socks which in-turn will be donated to the Veterans of America - Massachusetts organization's Operation Stand Down -- a grassroots effort to help homeless veterans "combat" life on the streets.

One of the popular displays is the exhibit and information tent setup by the  Framingham Artists Guild which features different member artist's work each week.

(Note: you can click on the photo below to enlarge them and view all as a slide show)

Members of the Framingham Public Library Foundation, Inc. setup a table and a display showing architect drawings and fund-raising info for a proposed new McAuliffe Library in Nobscot.

Pastor Debbie Clark and friends from Edwards Church in Saxonville were welcoming members of the community to visit the church which also hosts many non-religious events such as an "Earth Care Potluck Supper", (on Saturday July 16th, 2011), when the group will serve foods prepared from organic vegetables grown at Stearn's Farm and discuss the film "Coal Country" which was recently screened by the Framingham Sierra Club at the Framingham Library.

The FPAC-TV mobile studio, Executive Director Bill McColgan and crew were on hand with multiple cameras to record the entire concert, (which will air at a later date on Framingham Public Access television).

On the north-east corner of the common Mark Curtis and crew served up food and drinks at the Eagle's All American Grill concession stand. And of course no concert would be the same without "Concert Cookies" from Plymouth Church.