39 residential properties were sold in Framingham during the month of October 2011.

FRAMINGHAM, MA- There were a total of 39 residential real estate sales in Framingham during the month of October 2011. 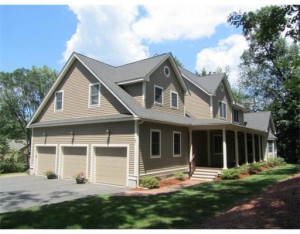 Selling for $640k, this 5-bedroom Colonial sitting on 2-acres of land at 418 Winch Street topped the Framingham residential real estate price chart for the month of October 2011.

The highest price paid for a single family residence in Framingham during October was $640k, ($29k below the $669k asking price), for a 9-room, 5-bedroom, 3-full/2-half bath Colonial sitting on two acres of land at 418 Winch Street.  The home had been on the market for approximately 10 weeks.  The seller had purchased the home in February of 2007 near the peak of the last real estate boom for $875k.

Bargain hunters scooped up some fast deals including a 9-room, 4-bedroom, 2.5-bath Contemporary at 48 Carter Drive which sold in just three days for $469.9k -- only $10k shy of its asking price.

The fastest selling single family was a 6-room, 3-bedroom, 1.5-bath Ranch at 55 Sloane Drive that sold in just two days for $177.5k, ($23k under its already low $200k asking price),  and was also lowest selling price realized for any single family home in Framingham during the month.

The glut of home owners facing foreclosure and number of bank owned properties on the market combined with tightened lending practices continue to depress real prices across the country.