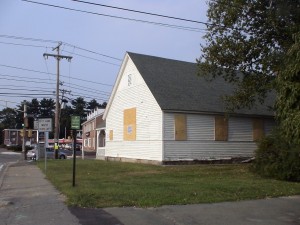 FRAMINGHAM, MA - At a Board of Selectmen Meeting on Tuesday November 8, 2011, Framingham Department of Public Works Director Peter Sellers asked Selectmen to postpone any plan to auction off the Nobscot Union Chapel which was recently taken by the town due to unpaid water bills.

Sellers presented a plan to round off the corner of Edgell Road and Water Street where the Nobscot Chapel is located.

Sellers reported that rounding out the final corner of the busy intersection would improve visibility, safety and traffic flow, and noted that the three other corners that make up Nobscot's main intersection have been rounded in the same manner he's proposing.

Sellers claimed that the chapel is not a historic building, although a sign bearing the words "Fram. Hist. Com." is affixed to Chapel identifying which identifies as being built in 1885. 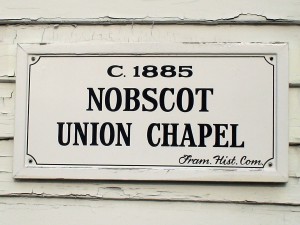 The sign was placed by the Framingham Historical Commission which at one time saw fit to mark the property -- but as it's not within a historic district, or listed with the National Register of Historic Places it is not "technically" a historic building.

At the meeting, for some reason Framingham Chief Financial Officer Maryellen Kelly also reported to the BOS that the building was not historic.

Sellers claimed that as the town now owns the property, it will save approximately $15,000 that would otherwise need to paid to a private owner for the land needed to round off the corner. 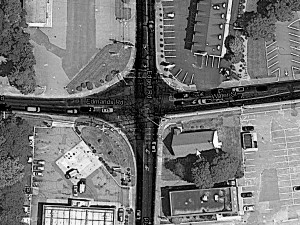 Aerial view of Nobscot intersection shows three corners rounded off, while corner in front of Nobscot Union Chapel has not been. (Click for Google Map)

When asked, Town of Framingham Treasurer/Collector Steve Price reported to the board that the only current cost to keep the building is a $1,500 annual fee for insurance on the property.

Selectmen apparently concuring with Sellers on the plan to round off the corner, briefly discussed possible uses for the remainder of the property.

Some of the ideas included razing the building or possibly moving the Chapel to another location and using the land as open space or a public park, and looking into incorporating the parcel in future development plans for the Nobscot Shopping Center. 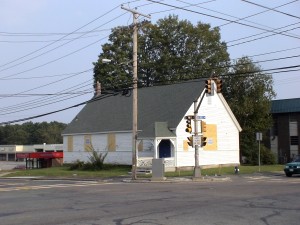 When the chapel was taken by the town, the windows were boarded up to secure the property.

The contractor who did the board-up also placed signs with their company name on some of the plywood sheets.

After being boarded up, the sheets of plywood covering the windows were painted white to make the building look better, but Selectmen Laurie Lee commented that building is now somewhat of an eyesore and deteriorates the look of the Nobscot neighborhood.

Lee asked that town workers now remove the contractor's signs, and she and Selectman Charlie Sisitsky discussed the possibility of hiring someone with artistic ability to paint faux windows on the plywood so the building would look better while its fate is being decided.

Selectmen asked that further planning and discussion take place and recommended the Framingham Community and Economic Development Corporation be involved.

Sellers reported that he could complete plans for the road improvements by the spring, and noted that Town Meeting would need to approve any plan.