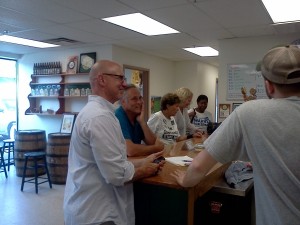 Sannicandro, Walsh, and supporters toured the facilities following a door-to-door canvass, spoke with the owners, and tried some of the craft specials available from the growing company.

"I thought this was a good place to take the team because it represents much of what this campaign is about and what this town is about," Sannicandro said. "This is a small business that just emerged last year. They're expanding. They're benefiting from a growing economy. And most importantly, they brew good beer."

Sannicandro tasted the "Hoponious Union" craft and a couple others. Before supporters, he discussed several ways the legislature supported small businesses last session, including a freeze on the unemployment tax for businesses, allocating seed money for new businesses, and the recapitalization of the Workforce Competitiveness Trust Fund, which provides retraining for middle skills jobs. 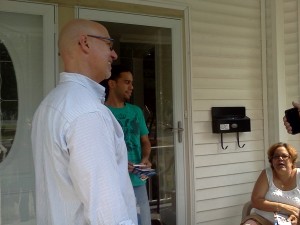 Sannicandro will canvass Saturday as well. Afterward, he will go see the new movie, The Campaign, with supporters.

Jack's Abby brewery opened in July 2011. It started with just family and has grown to include two employees. The owner, Jack Hendler, is grateful for the local support he has received, saying, "The most amazing thing for is is the response from the community. 80% of our costumers are local." According to its website, it is "the only all-lager brewery in Massachusetts." Jack's Abby specializes in "brewing traditional German style lagers with a distinctly American craft twist to them," according to the site. Some of their beers include Hoponius Union and Bourbon Barrel Aged Smoke & Dagger with Peanut Butter. 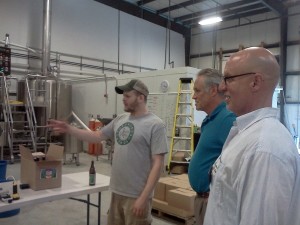 Comments Off on Sannicandro and Walsh Stop at Jack Abby's Brewery