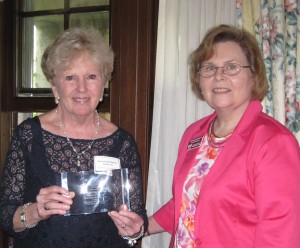 FRAMINGHAM, MA - Retiring McCarthy Elementary School teacher Patricia Towle of Framingham was honored with this year's Touch the Future Award from the Independent Association of Framingham State Alumni (IAFSA), Adams Road, Framingham. The award's name is inspired by Framingham State alum Christa McAuliffe's oft quoted, "I touch the future, I teach." as well as Christa's innovation and enthusiasm in teaching.

Towle, a 1964 Framingham State graduate, joined the Peace Corps before beginning her teaching career, most of which has been at the Miriam McCarthy Elementary School in Framingham. She opened her classroom to student teachers and maintained a collaborative and creative classroom environment. She inspired students to reach beyond the classroom door and become involved in the community. They witnessed her work on faculty committees to improve curriculum, school climate, and teacher morale. They saw her organize school fundraisers such as fashion or talent shows.

Towle lives and works in Framingham and participated in the Newcomers Club and the Framingham History Center. For several years she served as an enthusiastic IAFSA Board member. She showed her students that a teacher's impact can go far beyond an individual classroom.

She is retiring this June and hopes to spend more time in Maine.

The purpose of this award is to honor and acknowledge teachers who teach teachers; especially those who have contributed to advancing knowledge in a subject, and demonstrated and instilled enthusiasm for teaching.

The IAFSA Touch the Future Award included a check issued in Towle's honor to enable more grade school students to participate in missions at the Christa McAuliffe Center at Framingham State. Towle's name is now displayed on a perpetual plaque at Alumni House, home of IAFSA.

Towle was nominated by her classmates and is the third person to receive the annual award, established in 2012 in honor of the late Henry F. Regan, of Maynard and Falmouth, Massachusetts. Regan was the son of Irish immigrants and the first of his family to receive a college degree. While teaching science and coaching high school basketball, he decided he wanted to do more to guide the future of young adults. He pursued a master's degree in order to become a guidance counselor. He was a popular high school and later middle school advisor in the Bedford, Maynard, and Quincy school systems. In retirement he was a successful advocate for the betterment of his neighborhood. He instilled a respect for education in his family and sent three members of his family to Framingham State College. This award was established by his daughter, Debbie Cleveland, Executive Director of the Independent Association of Framingham State Alumni who presented the award to Towle at IAFSA's 2014 annual meeting.

IAFSA is a self-governing, non-profit organization established in 1874 by dedicated alumni. IAFSA continues its tradition of service to Framingham State students by receiving and administering funds that provide scholarships and benevolent assistance while maintaining the Alumni House for member and community functions. It is not legally affiliated with, sponsored or endorsed by Framingham State University.

For information about the Touch the Future Award and to submit nominations for next year's award, contact IAFSA at Alumni House, 42 Adams Road, Framingham, MA 01702,  508-872-9770, office@alumnihouse.org