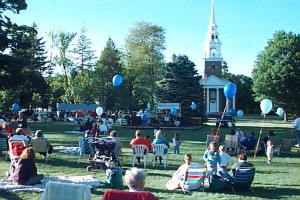 There is no charge, (concerts are free to the general public), but the organizers would appreciate if concert-goers bring and donate food items (or cash) to benefit Metrowest Harvest, (which stocks food pantrys that help many Framingham area families).

In addition to the Friday night concerts, a special screening on the movie, "Cloudy with a Chance of Meatballs" is scheduled for Saturday July 3, 2010 --the movie will shown on a huge 28' foot screen, outdoors on the Centre Common following a concert by Sound Assembly Chorus.

No mention of the summer concert series is complete without saying thanks to Jim Egan, Framingham Director of Town Owned Buildings.  Simply put, Jim makes Framingham a better place to live.  In the past Jim has arranged Winter Festivals with Ice-Sculpting displays and built an ice-skating rink on South Common.  Jim also played a major role in the restoration of Cushing Chapel.  Jim's passion seems to be making people happy and encouraging others to see the best in Framingham.

For complete details and schedule of performances, please check the 2010 Concerts on the Green page at:  www.framingham.com/rec/concerts-2010.html

Comments Off on 2010 Concerts on the Green