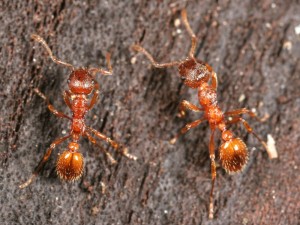 FRAMINGHAM, MA - Professor Eldridge Adams studies the "behavioral and population ecology of social insects" at the University of Connecticut. Working with Wen Chen, a Ph.D student, Adams is researching the spread of Myrmica rubra, or the European Fire Ant which is part of the INANE, ("INvasive Ants of New England") project.

The ants are red in color with a darker shade of red to the head.  They primarily live under fallen trees, stones and in the soil.  They build colonies which consists of many nesting sites with up to 100 queens.  Considered an invasive species, the aggressive European Fire Ant eats many other types of [native] insect and will attack anything that disturbs their nests.

Adams describes the ant as "more aggressive towards people than the native [red] ants of New England", and notes the ants are more prone to attack and bite than to scatter and run if you encounter them.

For more info on Professor Adams and his insect research projects visit his web pages at U. Conn, (http://hydrodictyon.eeb.uconn.edu/people/adams/)

Comments Off on European Fire Ants