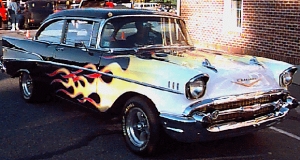 The classic cars that made Riley's in Nobscot a favorite Saturday night cruise destination has re-opened as CJ's Northside Grill.

FRAMINGHAM, MA - For nearly a decade, every Saturday night when the weather was nice, antique autos, high performance hot-rods and vintage vehicles cruised to Framingham to meet with other car enthusiasts at a restaurant in the Nobscot section of town.

Along with the partners, Chris' brother Sean, some cousins and other family members help cover the 16 hour days that start before the doors open at 6:00am each morning. 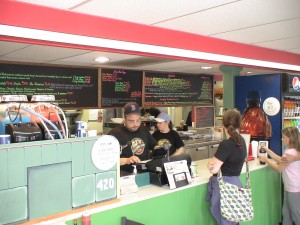 Taking orders at the counter, right next the 420 yd. sign on a Green Monster / Fenway Park themed wall inside CJ's Northside Grill in Nobscot

Several restaurants have come and gone at the Edgell Road location.

In the late 1950's and early 1960's Bob Bradway ran the place doing business as "Nobscot Drive-In", later more cooking space was added to the building and lobster steaming pots were installed and it became "Lobster In The Red", then it sat vacant for a few years and reopened as "Leon's", then "McCarthy's" which was best know for its breakfast menu and as a townie lunch spot, then as "Riley's"  with its famous roast beef sandwiches.

During the 10 years it was Riley's it became known regionally as the Saturday afternoon cruise destination.

Some nights the lot would be so full that customers, (and many of the vintage, classic and high performance cars), overflowed the place and needed to park in the lots next door and across the street -- but nobody minded, it was the place to be.

1950's Hot Rods, 60's Muscle Cars, Ford Model A's from the 20's and custom cars from every generation made the trek from all over MetroWest, and some from as far away as New Hampshire and Connecticut -- along with more than a few hometown car buffs.

When Joe Breed decided to close Riley's it was quickly re-opened as  "The Red Line Diner" -- but the place just wasn't the same without Joe and in less than two years the Redline closed its doors.

Hearing the place was available, Gagen and Anderson decided to go into business for themselves, restoring the building and bringing back a lot of what they learned working for Joe.

While the cars draw in customers on Saturday nights -- it's the food that keeps them coming back all week.

Locals will recognize that many of the menu items are the same as Riley's offered.  But, CJ's takes the art of cooking roast beef a step further -- theirs is slow cooked in a 1952 rotisserie oven that Chris had restored. It isn't just some old oven they bought from a used restaurant equipment dealer -- the rotisserie came out of the Butcher Boy Roast Beef restaurant Chris' father owned near Framingham State College in the 1960's.

And everything on the menu is super fresh -- CJ's doesn't use any frozen meat. The hamburger they use is fresh ground and seafood is market fresh. 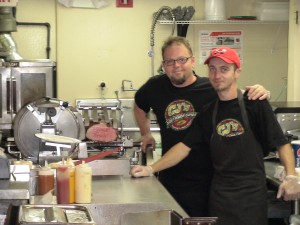 Chris Gagen, (left), and his brother Sean get ready for a busy Saturday night at CJ's Northside Grill.

The seafood plates make you feel like you stepped out of Framingham and are dining near the beach in Gloucester, Maine or down the Cape -- mouth-watering scallops, fried haddock, and battered to order fried clams (whole or strips) are piled high and served with freshly made fries and cole slaw.

If you still have room left after dinner, you'll want to try the ice cream -- again, not your standard chain-restaurant variety -- CJ's serves only hand-dipped cones, frappes, and sundaes -- and forget your diet, this is real 18% butter fat dairy fresh ice-cream! 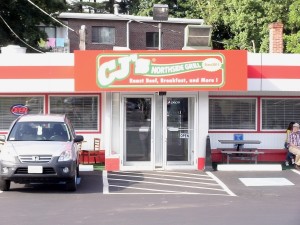