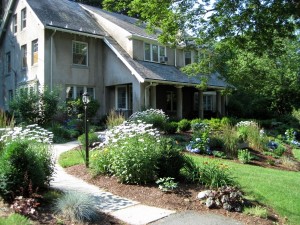 FRAMINGHAM, MA- The Independent Association of Framingham State Alumni, ("IAFSA"), a self-governing, non-profit organization established in 1874 which receives and administers funds that provide scholarships and interest-free loans to FSU students, has announced its list of 2011-2012 scholarship winners.

Scholarships, (and loan funding), are made possible by donations, bequests, and rental of the Alumni House.

Verena Lutz and Mariya Dzhyoyeva were the only Framingham residents among the 2011-2012 recipients. Both received a "Dorothy Larned Scholarship" award. The scholarship, which encourages the sharing of international cultures was established by the Class of 1939 to honor Dorothy Larned who came to FSU to teach French in 1929, (at the time the school was known as "Framingham Normal School"). Larned went on to serve as Dean of Women for many years until her retirement in 1961. Spencer Buell, of Shrewsbury, MA was also awarded a Dorothy Larned Scholarship.

In addition, Buell received a "Marilyn Minahan Foley Scholarship". While she was a student, Marilyn served as editor of the student newspaper, The Gatepost. She later served for many years as the executive secretary of IAFSA. When she retired the scholarship was established for future editors-in-chief of the newspaper. Buell is the current Editor-in-chief of The Gatepost and also submits articles as a correspondent for his hometown newspaper, The Shrewsbury Chronicle.

Two recipients from Ashland received scholarships: Sandaradura Chamara Silva was awarded the "Class of 1941 Scholarship" and Grace Solovieff-Mahoney was awarded the "The Ethel Groves Lucas Scholarship" which was established in memory of Ethel who graduated from the university, later returned to teach, and served as President of the Alumni Class of 1935.

Three residents of Marlborough received awards: Amanda Cain-Mailly and Julie Cain-Mailly were both awarded "Class of 1954 Scholarships", and Tanya Lopes was awarded the "Mary Melley Cotter Scholarship", made possible by donations made in Mary's memory at the time of her death in 1981 and a gift from Paul & Kathleen Cotter. Mary, a graduate of the Class of 1962, was active in Home Economics education, served as President of IAFSA in 1973, and was also a recipient of association's Distinguished Service Award.

Jessica Brooks of Plainville, MA was awarded a "Catherine S. Parker Scholarship". The fund was established by her sister, Hope Parker, in memory of Catherine, a 1924 graduate who majored in Home Economics, then in 1931 earned a B.S. in Education, taught Home Economics in Saxonville, then worked for 36 years in public relations for the Massachusetts Electric Company.

Angela Martin of Dracut, MA was awarded "The Boston Chapter of the American Sewing Guild Memorial Scholarship" which was established in 2010 in honor of former membership chair Carole Dahlstrom. The scholarship is available to "a Massachusetts undergraduate, with a demonstrated talent for garment construction", who fulfills the Guild's mission of "Advancing Sewing as an Art and Life Skill."

Other 2011-2012 IAFSA Scholarship recipients include:

A reception to honor all scholarship recipients will be held at Alumni House on Sunday, October 23, 2011.

One source of funding for IAFSA scholarships is from the rental of Alumni House which can accommodate as many as 60. It may be used for family occasions, business meetings, corporate retreats, or social events. Scholarship and loan applications, Alumni House hall rental information, and a means to make online donations can be found on the IAFSA website: www.AlumniHouse.org