FRAMINGHAM, MA - The Framingham State University defense forced four turnovers by the University of Massachusetts Dartmouth including a sack fumble by senior defensive end Chevere Archer (Lynn, Mass.) with 2:02 remaining in the game as the Rams defeated the Corsairs 21-14 in a Massachusetts State Collegiate Athletic Conference (MASCAC) football contest this afternoon  at Framingham’s Bowditch Field.

The Rams remain unbeaten in the MASCAC at 3-0 and improve to 4-1 overall, while the Corsairs slip to 1-3 on the year and are now 1-2 in the conference. 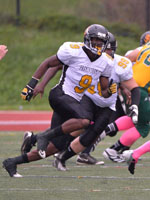 Archer finished the game with ten tackles, all solo, including five for a loss of 20 yards with a sack, forced fumble and fumble recovery, while senior Kevin Donahue (Norfolk, Mass.) racked up a game-high 12 tackles including 12 solo to go along with an interception.  Linebacker Pat McGrath (Everett, Mass.) also reached double figures in tackles with 10, seniors Michael Altavesta (Tewksbury, Mass.) and Matt Mangano (Winchester, Mass.) recorded the Rams other two interceptions in the game with Altavesta returning his 38 yards setting up the game-winning score.

The Corsairs took possession with 6:29 remaining in the game and were as they moved the ball down to the Framingham 35 yard line, but a pair of false starts pushed the visitors back to the 45.  After an incompletion quarterback Cullen Hanna (Richmondville, NY) completed a short pass to sophomore Abiola Aborishade (Attleboro, Mass.) giving the Corsairs a fourth and seven with 3:24 on the clock. After a timeout, Hanna completed a 15 yard toss to Brednen LaRosa (Everett, Mass.) to keep the drive alive.  Hanna’s first down attempt fell incomplete and Archer came up with a pair of big plays on the next two downs for the Rams. On second down, Archer stopped running back Charles Ruffin (Miami, Fla.) for a two yard loss and on the next play Archer came off the end untouched and hit Hanna causing a fumble which the Rams recovered near midfield securing the victory as the offense was able to run out the final 2:02 on the clock.

Framingham State used a 14 play 95 yard drive to get on the board first with 3:51 left in the opening quarter.  Senior Melikke Van Alstyne (Salem, Mass.) rushed for 74 yards on the drive including gains of 26 and 28 yards.  He scampered into the end zone on a 2-yard run to cap the drive.  Senior Will Menter (Haverhill, Mass.) converted the extra point and the Rams led 7-0.

UMass Dartmouth tied the score late in the second quarter with a 15 play 70 yard drive that was aided by three Framingham State penalties inside the 11 yard line.  Aborishade made the big play on the drive with an acrobatic reception for a 40 yard gain down the sideline on a 2nd and 22 from their own 39 yard line.  A nine yard pass to and a one yard run by Aborishade gave the Corsairs a first down at the 11 yard line.  Ruffin was stopped for no gain, but the Rams were called for a personal foul giving the Corsairs a first and goal from just outside the five.  The Rams would commit two more penalties giving the Corsairs a first and goal from the two.  Two plays later sophomore Brinston Facey (Randolph, Mass.) drove the pile into the end zone from one yard out for the score. The extra point was blocked, but an offsides call on the Rams gave the Alex Heffernan (Quincy, Mass.) another shot at the PAT and he split the uprights tying the game a 7-7.

The Rams started the second half with 14 unanswered points to take a 21-14 lead.  Van Alstyne scored his second touchdown of the day from one yard out on the Rams first possession of the half.  Altavesta set up the third scoring drive with his interception and return to the 11-yard line on the Corsairs first possession of the second frame. It would take Van Alstyne three plays to get into the end zone this time scoring from eight yards out.

UMass Dartmouth answered with a touchdown on the ensuing possession.  Hanna capped a 12 play 76 yard drive with a five yard TD pass to Aborishade on a 4th and goal from the five to pull within one score with 4:08 left in the third.

The Corsair defense came up with their first turnover of the game as Shaquille Brummitt (Boston, Mass.) forced a fumble that junior Cody Merritt (Plymouth, Mass.) recovered at the Framingham 18-yard line.  The Corsairs could not take advantage of the short field as Donahue intercepted Hanna at the two on the second play after the turnover.

UMass Dartmouth had one last shot at the tying score taking over possession on their own 45 with 6:29 left, but Archer’s sack-fumble ended the threat.

Aborishade finished the game with 64 yards rushing on 18 carries and made seven catches for 69 yards and a touchdown for UMass Dartmouth.

Comments Off on FSU Football Wins 21-14 Over UMass Dartmouth