FRAMINGHAM, MA - Motorists are advised that there may be construction work being performed during daytime hours on the following roads in Framingham during the week of April 25th - May 1st, 2021. Please note: Construction schedules are weather permitting and subject to change.

FRAMINGHAM, MA -- Starting the week of April 5, the Framingham Department of Public Works will begin its Citywide Street Sweeping Program.

Street sweeping will be completed in zones. Zone 1 is scheduled for Monday-Tuesday, April 5-6, weather permitting. View the Citywide Sweeping Program Map to reference which zone your street/road is located in. 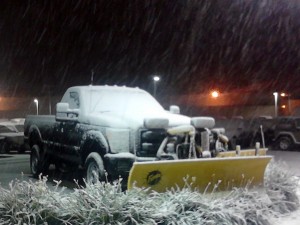 Snow plow parked, but ready to clean up after Nor'easter predicted to drop two to six inches of snow on Framingham, (Saturday, October 29, 2011).

FRAMINGHAM, MA- Having snow even once in October is pretty rare for eastern Massachusetts, but for the second time in three days, snow fell on Framingham.

As predicted, precipitation moving up the U.S. eastern seaboard combined with low pressure and declining temperatures resulted in a Nor'Easter dropping approximately 3" of wet snow in town between 5:00pm and 10:00pm today, (Saturday October 29th, 2011).

The small amount of snow which fell on Thursday, (October 27th, 2011), did not accumulate on roadways as the pavement was still warm from the day's moderate temperatures.

Comments Off on Second Pre-Halloween Snow Falls on Framingham