FRAMINGHAM, MA - The "3 Swingin' Tenors" entertained young, old and everyone in between for the July 22nd, 2011 "Concert on the Green", a free concert series held on the Framingham Center Common each Friday night throughout the summer.

The trio The 3 Swingin' Tenors;  Jack Alessi, Steve Marvin and Jim Porcella performed their repertoire of medleys and generational favorites -- with a few improvisational stories and a bit of joking around between sets.

The Framingham Park & Recreation Department is now in charge of the concerts, (since Jim Egan, Director of Building Services who has been responsible for the concerts for the past 15 years is retiring soon), got everything setup and made sure the night went smoothly.

Aside from the music, several groups including the Framingham Artists Guild had tents and tables set up on The Common.  Each week, the guild features a couple of their member's work in miniature gallery set up in their booth.  This week, painter Brother Eugene DeLauro, (of the Sons of Mary Missioners), and Polly Meltzer, a Sudbury watercolor artist were featured.

DeLauro, who has been a involved with the Sons of Mary since the 1950's works in oils and paints subjects from nature and portrait work had several of his works on display including a view of Farm Pond.  DeLauro has been a member of the Framingham Artist Guild for the past 15-16 years.

Meltzer, who primarily creates floral scenes, images of birds, insects, wildlife and an occasional nautical image was working on a watercolor scene of a turtle sunning itself on a log.  Meltzer had several sets of note-cards on hand which feature reduced size reproductions of her work.  Meltzer who is retired has been a member of the Framingham Artist Guild for the past 5-6 years.

(NOTE: You can click on the first image below to enlarge photos and view all as a slideshow)

Others who setup at the concert included The Framingham Democratic Town Committee who were promoting six diffrerent Democrat candidates who will vie for Scott Brown's U.S. Senate seat in the 2012 election.

FPAC-TV had the mobile studio truck on site and were giving tours during the night.

If anyone was hungry there was plenty to eat -- "Concert Cookies" from Plymouth Church, and of course -- Mark & Karen Curtis (and family) were on hand cooking up burgers, hot dogs, sausage sandwiches and serving cold drinks and snacks from the Eagle's All American Grill concession. 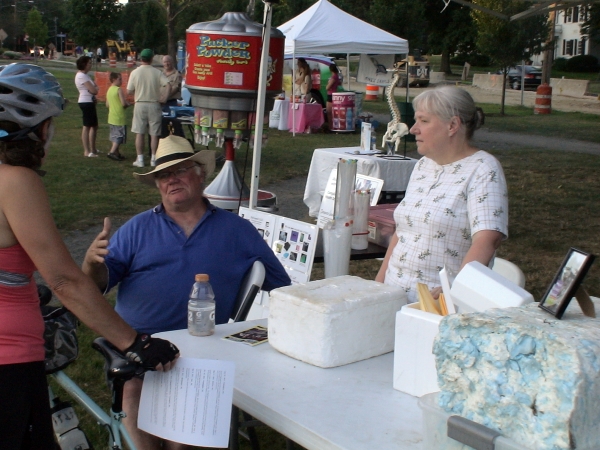 Dave and Barbara Sherman explain the styrofoam collection and recycling process done by their company ReFoamIt, LLC to an interested concert-goer at Framingham Centre Common

Dave & Barbara Sherman of ReFoamit, Inc. had a display of their styrofoam recycling operation.  Barabara said they now collect in excess of 1000 lbs. of styrofoam at each of their recycling events!  According to the ReFoamIt website, "When it [styrofoam] is burned, it creates a toxic ash and if it is put in landfills, it never breaks down.  Recycling is the only solution."

There was a little something for everyone -- music, dancing, food, drinks and spending some quality time outdoors with old and new friends in the community.

Comments Off on 3 Swingin' Tenors, 2 Artists, 1 Night of Fun On Common