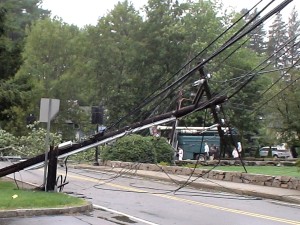 Hurricane Irene took down utility poles and trees across Framingham on August 28, 2011.

FRAMINGHAM, MA - After forming in the Bahamas on August 20th, 2011, then building to hurricane strength and tracking north/northwest along the eastern seaboard of the United States, Hurricane Irene struck Framingham, MA on the morning of August 28th, 2011.

This page contains a timeline of events, photos, videos and information related to Hurricane Irene as she approached and hit the Town of Framingham, MA.

(By the time she hit Framingham, Irene had been downgraded to a Tropical Storm, but still caused severe damage and knocked out power and other utilities across the town and region).

"At approximately 10AM on Sunday, August 28 we will be activating Framingham’s Emergency Operations Center to centrally direct Town operations in response to this storm. As storm‐related emergency needs may dictate, contact with this Center may be made by calling (508) 532‐5800 after the Center is activated. At all times prior to this, all Town emergencies should continue to contact the police or fire departments through the normal 911 emergency calling system" 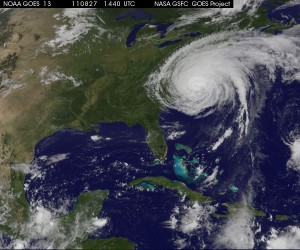 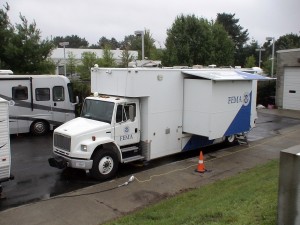 The following photos and videos show just some of the aftermath that residents, utility companies as well as Town, State and Federal agencies will be cleaning up and repairing in the coming days. 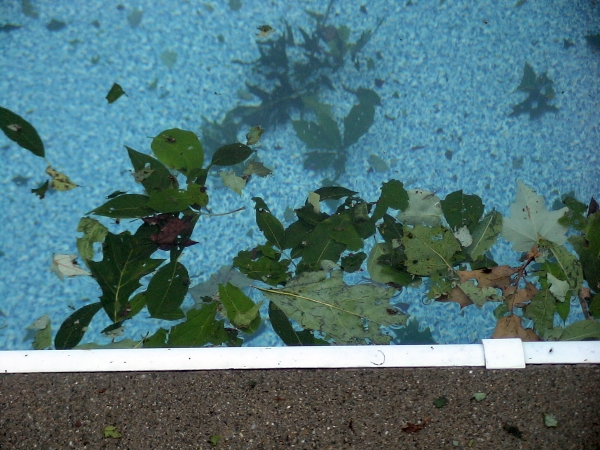 On August 28, 2011 leaves and twigs whipped up by winds from Hurricane Irene cover this swimming pool in Framingham. Roads, cars, lawns, roofs -- everything in town was scattered with debris. 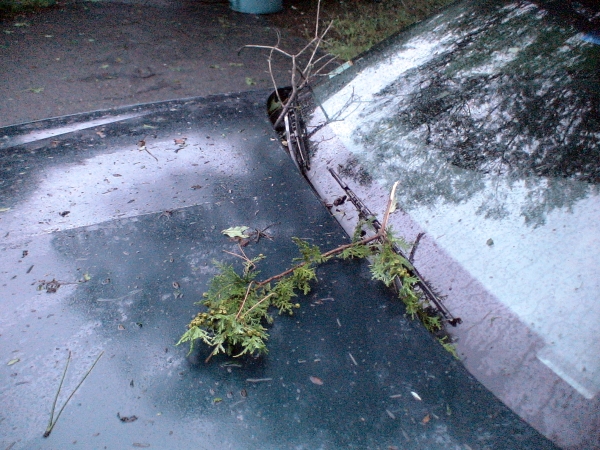 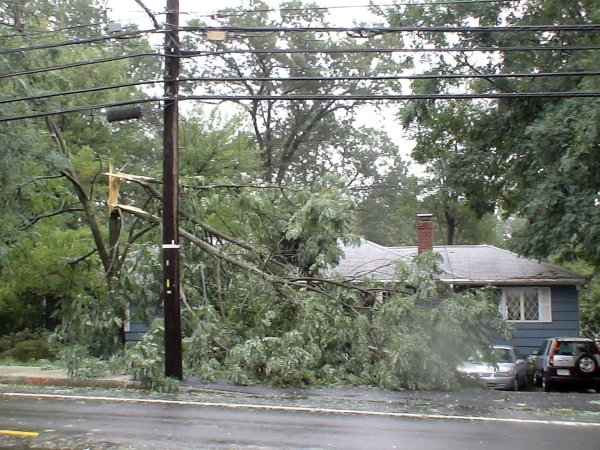 At approximately 9:30a.m. on August 28th, 2011, Hurricane Irene splintered this tree at Daniel Liberatore's house, 140 Water St., Framingham, MA. Shortly after the tree came down, Dan cut back some of the branches that threatened to take out his electrical service, but the work was in vain as a neighborhood-wide power outage occurred an hour later. (Photo by Caitlin Harris) 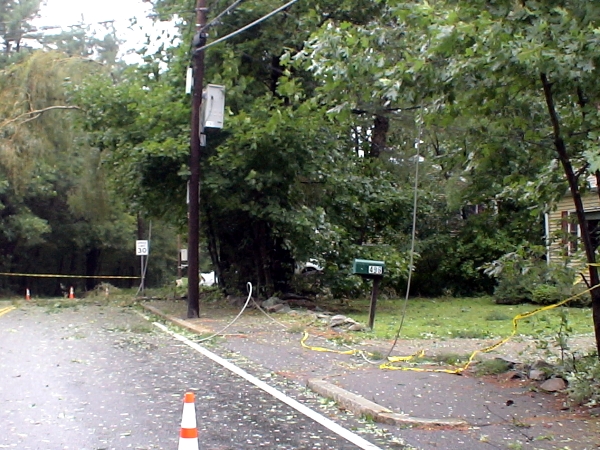 With power wires down in front of their 495 Brook Street home, Dave Ellis and family were blocked in as police and DPW crews had cordoned off the area and detoured traffic to Spruce St. and Gilmore Rd. Electrical power in the entire Brook St. / Spruce Street neighborhood was out. (August 28, 2011) 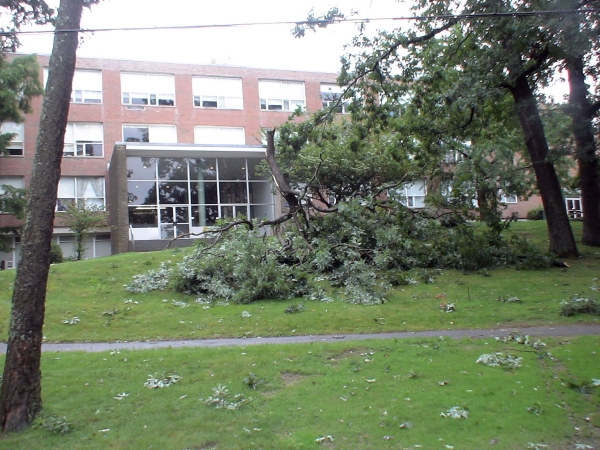 A large section of tree downed by Hurricane Irene on the front lawn of Framingham State University's Hemenway Hall (August 28, 2011) 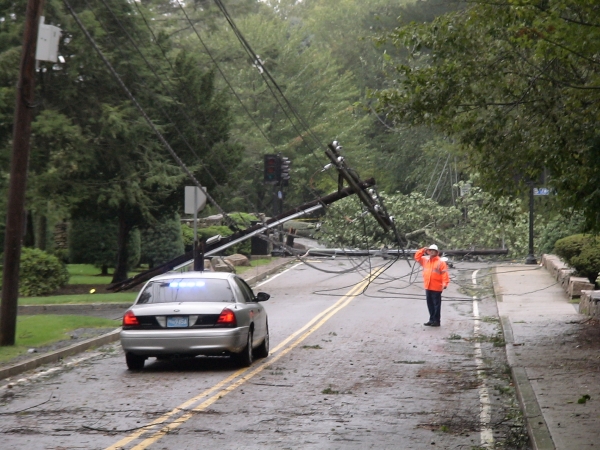 Framingham Police and an NStar worker survey the damage on Salem End Road near the intersection of Temple Street caused by a tree which was blown over by Hurricane Irene in Framingham, MA. (August 28, 2011) 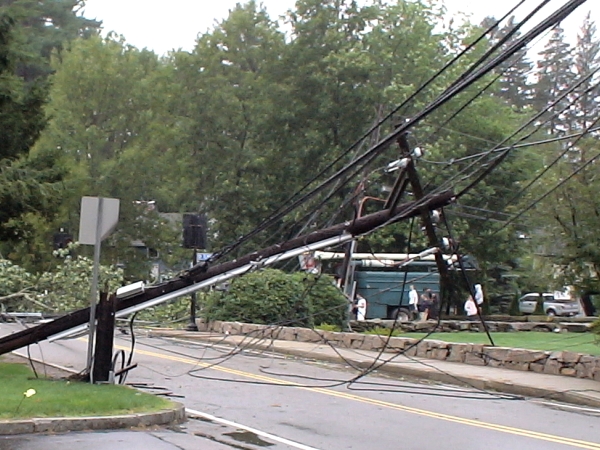 Close up of one of the phone poles on Salem End Road in Framingham, (near Temple Street), which were taken down by a tree blown over by Hurricane Irene. A tree cutting crew waits for NStar to cut power to the live wires so they can begin clearing the debris. (August 28, 2011) 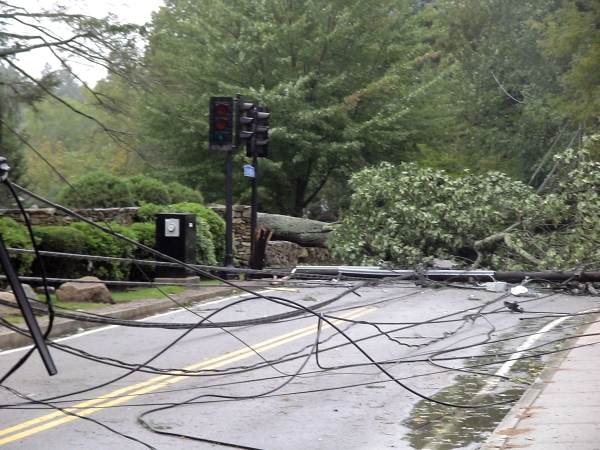 Close up of the tree and one of the two phone poles it took down on Salem End Road due to Hurricane Irene in Framingham, MA. (August 28, 2011) 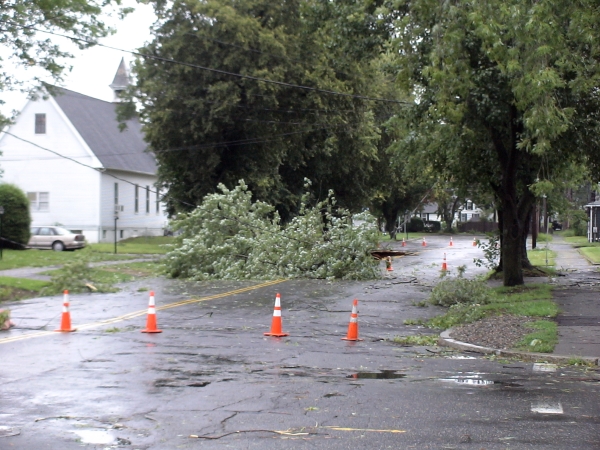 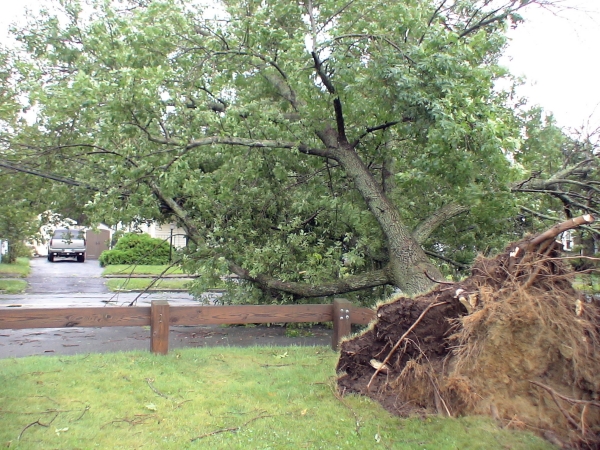 Hurricane Irene causes still more damage at the other end of Grant Street. A tree which was uprooted in Butterworth Park pulls down more wires and forces the Framingham DPW to detour traffic until NStar crews can repair the damage. (August 28, 2011) 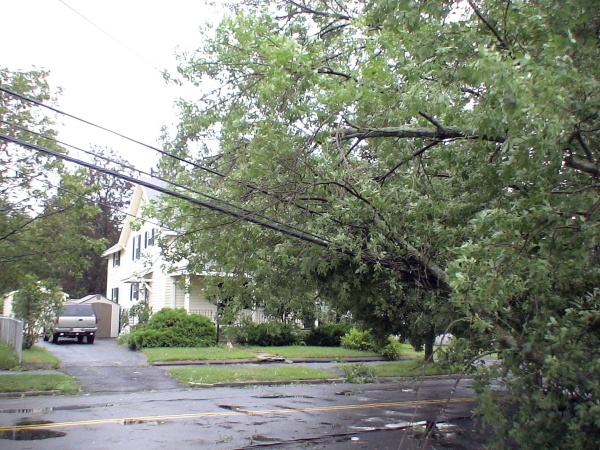 Close-up of downed wires near Butterworth Park in Framingham. (August 28, 2011) 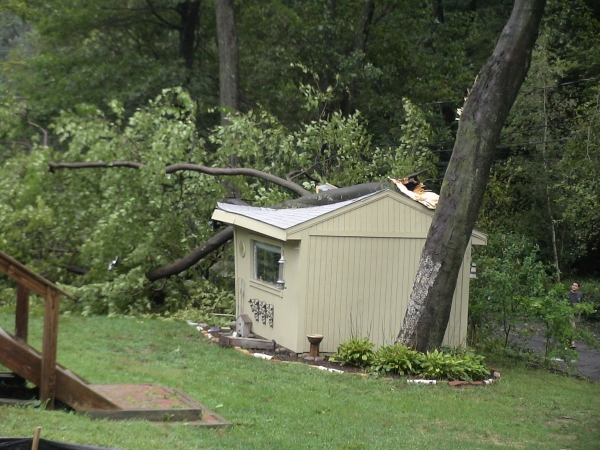 A tree limb downed by Hurricane Irene crushes this shed in the backyard of 16 Florissant Ave. in the Oaks Neighborhood of Framingham (August 28, 2011)

Framingham Police block off Main Street between Granite Street and Rt. 9 where a live 13,800 volt power line was downed by Hurricane Irene, (August 28, 2011)

With all the traffic lights out, and Framingham Police busy responding to emergencies throughout the town, drivers are left to navigate the intersection of Edgell Road and Route 9. Patiently taking turns motorists stopped, started and turned on and off of Pleasant Street, Main Street, Salem End Road and the ramps and turn-around lanes on and off of Route 9 -- as well, or better than if the lights were working! (August 28, 2011)

In the aftermath of Hurricane (Tropical Storm) Irene, the Town of Framingham continues its public safety and public service work to restore all areas of the Town to more routine operations. At one point on Sunday, during the height of the storm, we approximate that perhaps ¾ of the Town was without electrical power. We roughly approximate that ½ of Framingham is yet without power as of this morning. We understand from NStar that there are at least 63 specific locations (each with many customers) that are awaiting restoration of service. Thankfully, the predicted severity of the storm did not impact Framingham to the extent that many had feared.

Two of the Town’s fire stations are still without power (Nobscot and Rt. 9) and are operating on standby generators. Fifteen to twenty traffic signals are also yet without power and essentially operating as “four-way” stops in the meantime. All of the Town’s public safety and public service personnel are working to restore our roadways and neighborhoods to normal operations. I want to thank my colleagues for their continuing, tireless work in this regard. In the meantime, we ask for the continued patience of our residents as we pursue this restoration. We ask you to exercise care in both walking and driving throughout Town given the large numbers of trees/limbs and other debris throughout our neighborhoods and the continuing potential for downed wires (all of which should be treated as “live” for safety purposes). At all times for emergencies, residents should continue to contact the police or fire departments through the normal 911 emergency calling system.

Please use the comment section below to add other resources, offer storm readiness tips, or report Hurricane Irene  related info.